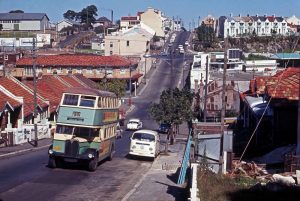 Where are we, and what’s changed?

Please send your suggestions to history@glebesociety.org.au

Photographer John Ward documented 60 years of Sydney’s public transport history. October’s mystery photo forms part of his collection acquired in 2018 by the City of Sydney Archives. The photo was taken in 1970.

Sybil Jack, Ian Miller, Ann Elias, Peter Robinson, Gary Ferrett and Julia Hornsby recognised the view as Wigram Rd looking towards the Harold Park paceway and Ross St.  Mary Jane Hogan remembered the Harold Park Hotel’s nickname ’The Holler’ (built in a hollow), identified the army buildings in Hereford St, and noted changes including traffic lights at The Crescent intersection and the construction of the Lew Hoad Reserve below Cliff Terrace. There were guesses at the date by vehicles caught on camera: FB Holden, combi van.

Wigram Rd looking south-west from near 70 Wigram Rd. It is surprising how much greener the suburb is these days.

The large building in the top left is the Army Drill Hall built during WWI but demolished around 2000. The Eternity Apartments are there now.

The smoking chimney is the main boiler chimney for RPA Hospital near Salisbury Rd. It is still there, but since it burnt coal, now mercifully decommissioned.

The last of the five poplars behind Lew Hoad Reserve was cut down in November 2006.

The vacant lot behind the poplars now has three houses on it.

The single terrace style house on the corner of Wigram Rd and Minogue Cres was demolished in the 1990s. It was used as the offices for McCormack Carriers who left around the end of the 1990s. McCormack’s yard was between that house and the Harold Park Hotel. There was a derelict house

adjacent to the hotel owned by the council by default for not having its rates paid. It was also demolished at the same time. The Centennial Apartments now occupy that site.

The Harold Park Hotel was closed in 2002, was substantially demolished then rebuilt to reopen in 2007.

Across Wigram Rd from the hotel was the former Harold Park Paceway Flat Tote building. The eastern end of the paceway grounds was The Flat and was the cheapest enclosure to attend the trots and have a legal bet. The totalisator building had a line of little windows facing the track with an operator on each one to service them. The crowds fell away from the trots and that enclosure was closed by the time the photo was taken.

The Flat was hopeless for watching the races because you could only see the backs of the horses as they passed the winning post. The Trotguide newspaper was published in the building with the diagonal front on the Bridge Rd/Ross St corner and the paper was printed on a press inside the Flat Tote building. The last race at Harold Park was 17 December 2010 and the entire Harold Park Paceway was demolished by 2012.