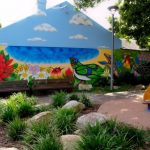 Love Your Park 2 was a project co-ordinated by the Glebe Society in 2011, undertaken by local youth under the guidance of a community artist, to create a lovely wall mural at the corner of Mitchell and Glebe Streets, Glebe. The project was funded by the City of Sydney.

The Glebe Society has its annual Christmas event every December, and this year it will be held in the grounds of historic Toxteth House, i.e. St Scholatica’s College. Christmas drinks and canapes will be served on the elegant verandah and (weather permitting) on the lawns of Toxteth House, in Avenue Road, Glebe.

On 19th November The Glebe Society will conduct another of its regular Guided Walking Tours. This walking tour will start at the Inner City Clay workers and then visit take in Art Almanac. Gallery Red, The Glass Artists Gallery, Salerno, The Floral Gallery then conclude with coffee and cake at Yuga.

Bernard Smith was one of the founders of The Glebe Society in 1969. He and his wife Kate were responsible for one of the classic books of Glebe – “The Architectural Character of Glebe”. He was an eminent art historian, writer, professor of fine arts at the University of Sydney, and a beloved member of the Glebe Society. He died in Melbourne this month aged 94 years. A memorial service will be held in Melbourne at the National Gallery of Victoria on Monday 28th November

The Glebe Society held its Annual General Meeting on Sunday 28th August 2011 at Benledi. The meeting was well attended with some 65 members. The two outgoing Presidents during the past 12 months each gave their President’s Report, and they are now available for reading online. Our guest speaker was Dr Lisa Murray, the City Historian, who spoke on “Local History: making connections in the Digital Age”, and her talk is also available online.

The Glebe Youth Service (GYS) will hold its annual Film and Fun Night on Saturday 12 November, 2011 at the Peter Forsythe Auditorium, Glebe. The night includes performances from local musicians such as hip-hop group Str8 Ballaz as well as artists and film makers. Each year GYS partners with Short Black Films to produce a 10-minute short film based on young people’s personal experiences. Many of these young people have overcome adversity to find a voice through their art.

The Glebe Society will be holding a Brewery Tour & Tasting event at the Malt Shovel Brewery (makers of James Squire beers) at Camperdown on Monday 31st October, from 5.00 p.m. till 7.00 p.m. Cost is $30, which includes tasting of some beers and some finger food. Our host for the evening is Mr Chuck Hahn, who will talk about the how their range of beers can be matched with a variety of foods.

14 October 2011 Silvia Corriera Planning Department City of Sydney Dear Silvia SUPPLEMENTARY SUBMISSION: HAROLD PARK MASTERPLAN AND DAs FOR PRECINCTS 1 & 2, D/2011/1311-2 & 1298-9 The Glebe Society submitted its response to these DAs on 26 September 2011 but noting that the date for responses to the Harold Park DAs has been extended […]

Presentation on the restoration of the Glebe Town Hall

As most Glebe residents will have noticed, the Glebe Town Hall, built in 1880, is undergoing substantial renovations and will not be re-opened until mid-2012. The City of Sydney will make a presentation to Glebe Society members interested in architecture and heritage on the restoration. Representatives from the construction company and the City of Sydney will take part in the presentation. The event will be held on 20th October.

The North Shore Historical Society is holding its biennial competition established by the Society to encourage historical research at the community level and, in particular, to seek out non-professional history enthusiasts who have a story to tell.
The prizes offered are generous: First Prize is $3,000.

TGSI members might also be interested in the views of another local community group. The Save Rozelle Bay Association' has special interest in this development because of its effects on Annandale, parkland and the foreshores. It has agreed to display its submission on our site. You will see that the submissions are complementary but with […]

The Annual Mitchell Street Fete will be held on Saturday 29th October 2011 from 11.00 a.m. till 2.00 p.m. in Mitchell Street, Glebe. There will be lots of stalls and activities organised for the event, and it’s a great day for the residents who live nearby. The Glebe Society have been regular supporters of the event.

Is your family mutt a winner? Find out on 16th October at the Wentworth Park Community Games. The games bring together residents from Glebe and Forest Lodge to compete in a variety of more-or-less serious sports for the GUP Cup – actually one red and one blue gumboot mounted on a piece of wood. Points are […]

Meet old friends and meet new people on “Thirsty Thursday”. These occasions are held monthly on the 1st Thursday of the month and are an opportunity to dine informally at a Glebe restaurant. We aim to slowly rotate through most of Glebe's restaurants. On Thursday 1st December join us at the "Spanish Tapas", 26 Glebe Point Road, […]

The Glebe Society has sent its Submission to the City of Sydney in response to the Harold Park Master Plan as proposed by Mirvac. Please note that the Closing Date for submissions to council closed on 28th September. The Glebe Society’s submission follows.