by Lyn Collingwood, from Bulletin 8 of 2022, October

The eighth site nominated by the Glebe Society for a Blue Plaque is 151 Glebe Point Rd, where the abortionist Etty Mace (1878-1950) lived.

Although used for centuries as a means of preventing the birth of unwanted children, abortion in NSW was not fully decriminalised until 2019. In Mace’s time, abortionists had to work in secret and drew public attention only when things went wrong. Mace was gaoled twice in connection with a death, but no doubt successfully operated on a great many women.

One of ten surviving children of a country woodcutter who was shot dead, Etty, then Esther Watson, married a convicted thief who disappeared after serving a gaol sentence for bigamy. Their son was charged with horse stealing; one of Etty’s sisters, a flamboyant dresser like Tilly Devine, was a prosperous brothel-keeper. Etty went into the abortion business with two other sisters. 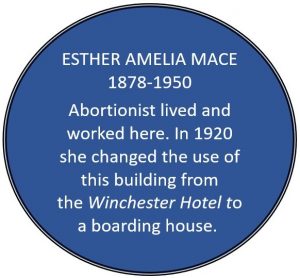 Mace was a working-class woman of limited education from a dysfunctional family trying to make a living when choices were limited. Although widely condemned, abortionists performed a service for desperate women. The topic remains controversial.