Archbishop Welby, the spiritual leader of the Anglican Church, was visiting Australia to meet community leaders including First Nations groups to discuss issues of reconciliation, understanding and healing. Uncle Ray is the pastor of St. John’s Indigenous Ministries and has ancestral ties with the Kabikabi and Gurang-Gurang tribes of Queensland. He has dedicated his life to supporting members of the Stolen Generations. 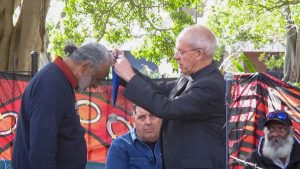 Archbishop Welby said that Uncle Ray had grown up on a reserve and had only narrowly avoided being taken from his parents by the colonial authorities: ‘Through his ministry he has dealt with complex intergenerational trauma and high rates of incarceration, suicide, and addiction in his community’.

Uncle Ray’s father was a Christian leader who worked on cane farms throughout Queensland. His family would move with him from farm to farm, and when the cane season finished, they lived back on the designated reserves or missions.

Speaking of his own life Uncle Ray said ‘As we came out of these reserves and foster homes we were forced to live in new urban environments where we now had to face the daily onslaught of racism. I joined the rest of the young people who didn’t have the wherewithal to counteract this racism and like them found the only way to relieve the pain was to get drunk and take drugs.’

‘My parents were also struggling with these issues but what kept them together was my father’s incredible faith and eventually I felt the call to follow in his footsteps and leave behind the drug induced state I was so enjoying. I knew I had to draw back into his faith to find a different direction for my life. I decided I wanted to work on the streets, at the grass roots where the greatest need lay. The terrible pain you still see on the streets shows how the brutality of our history is continuing into the present.’

Speaking on ABC Radio, Archbishop Welby said that the question of a Voice to Parliament by First Nations people was a matter for the Parliament and the Indigenous People of Australia. ‘I’m here to learn, not to lay down laws’, he said.  But speaking at St. John’s, the Archbishop asked rhetorically ‘How can you be reconciled if you haven’t been conciled in the first place?’

‘We can’t change history, terrible things were done – we must recognise it, we must admit it, see reality. We can’t change where we are at this particular moment, but we can change the future.’