A public meeting attended by about 100 people has condemned a proposal to develop 122 dwellings on the former tram depot site in Maxwell Road, Glebe. 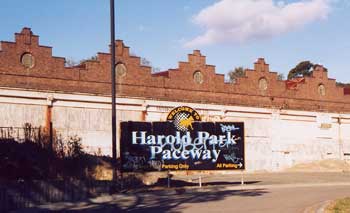 The development is proposed by the NSW Harness Racing Club which acquired the site from the NSW Government several years ago. It would occupy a large part of the site and rise to approximately the same height as the existing main grandstand. In addition, 222 car parking spaces would be built underground. The proposal also includes 1,600sq.m. of commercial studio space, a childcare centre and a small exhibition of trams that is called a museum. The DA in no way improves the harness racing facilities at Harold Park, or the needs of the community, but is aimed solely at making money for the club.

The Society, and other community organisations, has long regarded the sheds as having much potential for community and artistic use, including a market, artists’ studios and/or performance spaces. We have already made some progress generating ideas for the site and also contacted other interested organisations.

In the application, the proposal does not really restore the sheds, as a multi-storey apartment block would compromise a considerable part of them. The site is currently zoned open space under which housing is prohibited, but the developer is claiming existing use rights.

The resolution passed at the public meeting held at Benledi on 9 March reads:

This meeting of concerned residents calls on the City of Sydney and, if relevant, the Central Sydney Planning Committee to reject the current application D04/01624 for 122 dwellings proposed to be built at Rozelle (Glebe) Tramsheds because:

1. The Tramsheds are zoned Open Space and a residential development is not permissible under LEP 2000.

2. The Tramsheds do not have existing use rights of any kind. The original use ceased in 1958 and the only subsequent approved use also ceased many years ago.

3. The Tramsheds are an important reminder of one of the most extensive public transport systems in the world, Sydney Trams that, unlike those that still provide outstanding service in Melbourne, were replaced by the less efficient buses. As such they are a Heritage Item under LEP 2000, and any future use should retain the original structure in its entirety.

4. The current proposal is not an adaptive reuse of a Heritage Item. It destroys most of the fabric of the Tramsheds and the significant sandstone escarpment, and detracts from the view of the Sheds when viewed from any point except directly in front.

5. The proposal contravenes both the density and height restrictions of LEP and DCP 2000.

6. The proposal violates sound town planning principles. The site is on low-lying land adjacent to a watercourse, isolated from any residential street and accessible only via a private road. Such land is normally reserved for non-residential use, and in Glebe especially for recreational use. This would conform with existing land use patterns around Sydney Harbour.

7. The existing building has the advantage of large uninterrupted internal spaces with excellent natural lighting from the roof, features that render it ideal for recreational, community, display and creative uses rather than housing.

8. The proposed dwellings along Maxwell Road will seriously impact on the amenity of nearby residents.

9. The proposal has unacceptable traffic impact on the local street system and the park, with the only access for all vehicles being over a public park. This contravenes a condition of the 1994 development approval.

10. The poor design and scale of the apartment development is contrary to the design principles and design code in the State Government’s Policy for Design of Residential Flat Development, and results in unsatisfactory future amenity for residents.

11. The form, extent and design of the development are incompatible with and will have an unacceptable impact on the heritage significance of the Tramsheds and the local Conservation Area.

12. The proposal should not even be considered unless and until a satisfactory overall Master Plan for the various components of the Harold Park site has been prepared with public consultation, so as to cater for and recognize potential adverse impacts between uses and on the local neighbourhood.

13. New South Wales Harness Racing Club, however it came to acquire a valuable Government site, cannot find a use for it related to racing, and this was the purpose for which the land was originally acquired using grants from the Racecourse Development Fund. It is not an appropriate owner or developer of the Tramsheds, and should relinquish ownership, preferably to the NSW Government or the City of Sydney, so the site can be restored and used in a manner appropriate to its Open Space zoning.

14. The development should be assessed in relation to the environment, heritage architecture and amenity for residents of Glebe as a whole, taking into account the massive impact of the Australand development on Blackwattle Bay on all these factors, and especially on traffic from this and other developments.
The Society’s planning convenor, Neil Macindoe, has compiled this list of points which you may wish to consider:

* The site is zoned open space and residential use is prohibited.
* There are no existing use rights. All approved uses have expired.
* The Tramsheds are a Heritage Item and should be preserved in their entirety.
* The proposal is not an adaptive reuse. It destroys the heritage value of the Tramsheds.
* The site is low-lying and isolated, suited for community, not residential, use.
* The large internal spaces of the Tramsheds are suited to community, not residential use.
* The access is via a narrow, ungazetted road across parkland and further compromises the use of Federal Park.
* Traffic flow from a residential development, unlike that from a community use, will increase pressure on The Crescent and surrounding streets at peak times.
* The terraces along Maxwell Road will impact adversely on residents on top of the cliff.
* The cliff is a topographical landmark and is adversely affected by the proposal.
* The design of the dwellings leads to poor amenity.
* The proposal contravenes the density and height controls for Glebe.
* Since Harold Park cannot use the Tramsheds in connection with racing it should relinquish the site to the City or NSW Government
* There is too much new development in Glebe. It is impacting adversely on the amenity and heritage character of the suburb.