HOT TOPIC: Momentum is growing for the restoration of Glebe Island Bridge and The Glebe Society plans to give it a good push 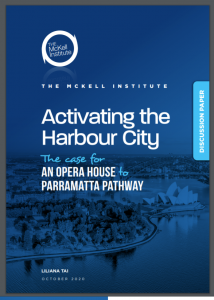 Proposals to restore the Glebe Island Bridge for use as a walkway and cycle path are mounting. The latest is from the McKell Institute, which has proposed an active transport path linking the Opera House and Paramatta along the harbour foreshores and southern bank of the Parramatta River.1

Phase 1 of the proposed project includes the ‘Foreshore Loop’, a five kilometre circuit around Blackwattle and Rozelle Bays. For it to be a ‘loop’, the report stresses that the Glebe Island Bridge must be ‘repaired and re-opened’, and a ‘greenway’ established to connect Wentworth Park and Rozelle Rail Yards.

City of Sydney is also calling for the reinstating of Glebe Island Bridge for active transport, as ‘key infrastructure’ for ‘active (and potential public transport) links across the bay’ 2; and, of course, the Glebe Society has been calling for this for many years.

Although it is outside its terms of reference, draft plans for Revitalising Blackwattle Bay suggest restoring the Glebe Island Bridge, to link up with the proposed foreshore walk.

And five years ago, in the ‘Bays Precinct Transformation Plan’ 3, the NSW Government committed to ‘work towards’ … ‘operationalising Glebe Island Bridge for active and public transport’.

The McKell Institute proposal estimates the cost of operationalising the Glebe Island Bridge to be around $43.6 million. This is based on the last publicly available costing which was done for Transport NSW in 2013 by ACIL Allen Consulting (adjusted for CPI increases). 4

The Glebe Island Bridge was completed in 1903. The Bridge, and its twin, the Pyrmont Bridge, are swing span bridges. It was decommissioned in 1995, when the Anzac Bridge was opened. The Bridge has swung into action several times since for local events, including a marathon.

Although it has several heritage listings, the Bridge is being demolished by neglect. But the repopulation of the Pyrmont area and the Covid pandemic have increased the pressure to restore the Bridge, to enable pedestrians and cyclists to move between Pyrmont and Balmain, and to walk or ride around Blackwattle and Rozelle Bays.

December 3, 2020 will be the 25th anniversary of the decommissioning of the Glebe Island Bridge. The Glebe Society is planning to mark the occasion by calling for its restoration with a gathering at the Bridge. Details will be posted on The Glebe Society website and Facebook page.

Posted on November 4, 2020 for Asa Wahlquist