Report from the Point – The Glebe Society

Report from the Point

Technicians spent a day or two last week working on the ‘Earth v Sky’ light installations and yesterday there was someone working, and testing, the control box for the same. (We were thrilled to think the repair hadn’t fallen off Council’s to-do list.) Unfortunately, the Earth v Sky artwork still isn’t operational.

I wrote in early January in a personal capacity to Jamie Parker to express concern about the Anzac Bridge lights, pointing out the importance of aesthetics in relation to this much-photographed icon (lights missing, replacements dissimilar, etc). Jamie has passed my concerns on to the Minister; no reply to date. In the absence of any response from the Transport Minister, I am guessing what is going on with the bridge lights ‒ the lights across the entire deck are being changed from a yellow light (sodium vapour?) to an energy-efficient (?) but far less dramatic model. 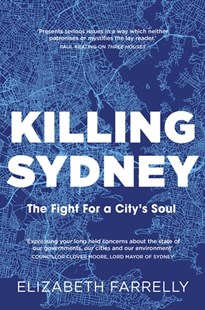 SMH’s webpage had an edited extract from Elizabeth Farrelly’s new book Killing Sydney which is something of a paean to the inner suburbs, including Glebe. There are a couple of nice photos on the site. I’ve read Killing Sydney which tells a pretty depressing story, and only tangential references to Glebe but Farrelly’s overall argument is very relevant. The extract can be seen here: https://www.smh.com.au/culture/books/my-love-affair-with-sydney-and-my-fears-for-its-slow-strangulation-20210115-p56uhd.html