New Book Lifts the Lid on Greyhound Racing and Government

Going to the Dogs: A History of Greyhound Racing in New South Wales, by Max Solling, Halstead Press. Available from Gleebooks. 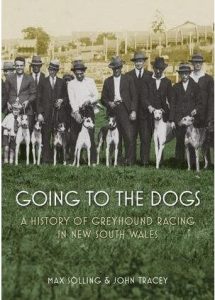 Think Glebe, think sport, think history, and your thoughts will immediately turn to Max Solling. Max’s works include The Boatshed on Blackwattle Bay (1993), a history of Glebe Rowing Club, and An Act of Bastardry – Glebe’s Rugby league team, ‘the Dirty Reds’(2014). In this case, his co-author is John Tracey. According to the publisher’s blurb, in a long association with greyhound racing in NSW, John acquired an encyclopaedic knowledge of the sport, and this certainly shows in Going to the Dogs, a history of greyhound racing in New South Wales (2020). The authors are again dealing with a sport which has (or perhaps one should say, had) considerable importance in our suburb, but in a broader context than Max’s previous works on rowing and Rugby League.

A considerable amount of the early part of the book deals with the history of greyhound racing, commencing with the introduction of live-hare coursing from 1876 to 1953, and modern greyhound racing since 1927. This section contains a huge amount of detail, which will no doubt be of interest to people involved in the industry, but which tends make the eyes of the general reader, including me, glaze over. Of much more interest to those of us who have lived in Glebe and Forest Lodge for 50 years or so is the story of greyhound racing at Harold Park (formerly called Epping Racecourse) from 1927 to 1987 and at Wentworth Park from 1939 to date. And that story is replete with intrigue, corruption and incompetence, notably concerning the erection of the new grandstand at Wentworth Park which ultimately sent the National Coursing Association broke and led to the abandonment of greyhound racing at Harold Park in 1987.

The book looks at the social context of greyhound racing – the efforts to ban it, led by ‘middle class moralists and social reformers who opposed all forms of betting’ and some of the ‘colourful characters’ on the fringes of the sport. It also looks closely at the most recent ban on greyhound racing in NSW imposed by the Baird government in 2016, only to be revoked before it would have come into effect in 2017.

The conclusion drawn by the authors is that there is, and always has been, a fundamental class distinction between horse racing (‘the sport of kings’) and harness racing on the one hand, and greyhound racing (a greyhound being ‘the working man’s horse’, according to Jack Lang) on the other. The book points to the hypocrisy of condemning ‘animal wastage’ in relation to greyhounds – deaths and injuries arising from racing accidents and the culling of under-performing dogs – but not similar ‘animal wastage’ in relation to horses.

This may very well have been the case in previous decades, but I am by no means certain that it remains the case today. And there is one very clear distinction between horse racing and dog racing that is glossed over in the book – cruelty to horses and dogs may be similar in many respects, but the gratuitous cruelty to other animals is a feature of dog racing, not horse racing. Rabbits, cats, piglets and possums have all been sacrificed in the name of ‘blooding’ greyhounds, and this is something that rightly revolts everyone, including it must be said most current participants in the greyhound racing industry. But who can forget the ABC Four Corners program Making a Killing that aired on 16 February 2015? The only comparable ‘sport’ I can think of is fox hunting, condemned for the same reasons and hardly ‘the sport of the common people’.

Going to the Dogs describes greyhound racing as a sport in decline but is ambivalent about the nature and extent of that decline. Statistically, it is hard to resist the conclusion that it is only a matter of time before greyhound racing, at least at major metropolitan centres, simply fades away. There were apparently 11,298 registered owners in NSW in 1975, and that number had dwindled to 2,082 by 2012. Crowds at Harold Park in 1953 averaged 11,500 per meeting. The first joint meeting conducted by the National Coursing Association and the Greyhound Breeders Owners and Trainers Association at Wentworth Park in 1987 attracted a crowd of 7,000. Now there is no track at Harold Park, the NCA has departed from Sydney, and Wentworth Park attracts crowds of a few hundred per meeting, most of whom are breeders, owners and trainers. The grandstand at Wentworth Park, which should never have been built and which is now for practical purposes an office building in a public park, stands virtually empty on race nights.

Going to the Dogs is an interesting historical resource pulling together pretty much everything ever said or written about greyhound racing in New South Wales but is unlikely to attract a wide audience outside the greyhound racing industry – unless, of course, like me you can’t wait to see the return of Wentworth Park to the people of Glebe, from whom it should never have been taken in the first place.

Ted McKeown was a member of the Wentworth Park Sporting Complex Trust from 2005 and its chairman from 2015 until the Trust was abolished in 2016.