Hereford House is a two-storey, symmetrical, stucco residence with a slate hipped roof.  The ground floor has Venetian-style windows.  The upper floor has a cast-iron verandah and French doors.  The cast-iron columns and valances extend over both levels.  It is an excellent example of a mid-Victorian Filigree style villa.

This house was built for William Bull, wheelwright and son of a marine in the First Fleet.  William Bull died in 1900 and his wife, Catherine died a year later.  Hereford House was sold to Alice Goldsmith and her husband William, a butcher, in 1909.

It is claimed that tennis champion Lew Hoad (1934-1994) learned to play on two tennis courts at the rear of the property.

The property was sold to the NSW College of Nursing, which in 1981 donated some archival material relating to the Bull Family to The Glebe Society.  The house is now in private hands.

This is the second property in Glebe to bear the name Hereford House.  The first house of this name (built 1829, demolished in the 1930s) stood in what is now Foley Park.

There is a late 20thC medium-density housing development at the rear of the property, where the stables – built for draught-horses – once stood. 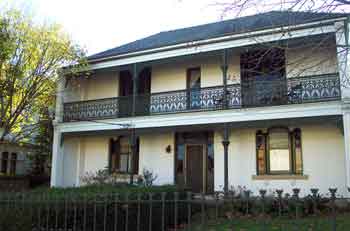