NSW State Records show that the NSW Government purchased the property in about 1920, “to be used as a depot for State Children. By 1939 Bidura housed boys up to 6 yrs of age and girls up to 18 yrs, with an attached school operated by a governess. Bidura operated as a receiving home where children were temporarily accommodated awaiting placement in foster homes or awaiting transfer to other establishments.” It ceased functioning as a children’s home in February 1977, when it was planned to build the Metropolitan Remand Centre and Bidura Childrens Court at the rear.

Bidura was restored by NSW Public Works in the 1980s. It has a fine ballroom located separately to the right of the main building. Bidura House has been occupied since about 2000 by the DoCS Centre for Parenting and Research.

Bidura can be visited on the Glebe Early Architects Walk.

If you are a former resident of Bidura and need support, contact CLAN. 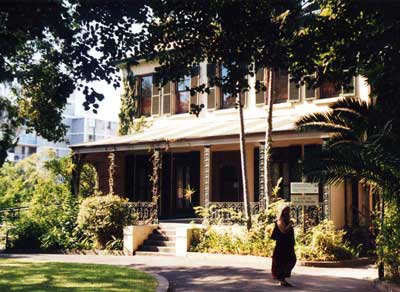