The advent of the Covid 19 Crisis has seen a marked increase in active transport. By this I mean walking and cycling. This has seen Inner West Mayors telling residents to avoid walking and cycling in places such as the Bay Run in Leichhardt/Drummoyne. It has seen crowded scenes on our own Foreshore Walk. It has highlighted the need for more places to walk and more cycling paths.

Now that the community is returning to work the government is encouraging people to walk or cycle to work. Living in Glebe, if you work in the city this is a healthy and realistic option albeit the footpaths and paths are far from ideal.

Two positive changes for this option have been introduced:

The City of Sydney/ Transport NSW introduced automated pedestrian buttons in central parts of Sydney so that buttons did not need to be touched. The positive consequence of this is that the traffic lights automatically have a green walk light in every phase. Missing pressing the button and having to wait a whole new light phasing (a pedestrian’s nightmare) is alleviated. The Glebe Society has written to both City of Sydney and the Minister for Transport requesting that this initiative be extended to Glebe.

We have received a positive response from the Council who have a policy seeking automated pedestrian buttons throughout City of Sydney (Read the Lord Mayors response). We await a response from Transport NSW. 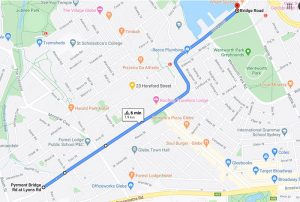 A joint announcement from City of Sydney and Transport NSW has said that there will temporary (?) bicycle lanes on either side of Pyrmont Bridge Road from Booth Street down as far as the Fish Markets. This will result in motor vehicle traffic having one lane each way as opposed to two in some locations.