A tale of two Prime Ministers – The Glebe Society

A tale of two Prime Ministers 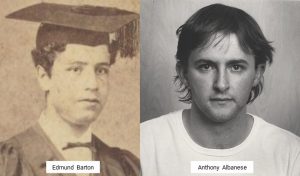 Australia’s first Prime Minister, Sir Edmund Barton (1849-1920), was born in Glebe and our 31st Prime Minister, The Hon. Anthony Albanese also has a close association with Glebe. Albanese was born in 1963 and grew up at 41 Pyrmont Bridge Rd, Camperdown. It’s only 250 metres west of Orphan School Creek, which is the western boundary of Forest Lodge, so it’s close enough, at least in my reckoning, for us to embrace him as a near neighbour and an honorary Glebe-ite (and Forest Lodger).

The Barton family were only in Glebe for a few years. They moved here from central Sydney – into a house they rented from Thomas Bowden. The house was described as a villa ‘containing a basement kitchen, laundry, pantry and store: on the ground floor – entrance hall, dining-room, parlour, two bedrooms, and study, with four attic-bedrooms above’.1 It is likely that it was in this house on 18 January 1849 that Edmund Barton was born. It sounds a spacious house but he was the 11th child! By 1851 the family had moved to Cumberland St in The Rocks.

Anthony Albanese grew up in Camperdown. His associations with Glebe are much richer than Barton’s. His childhood was spent in public housing. It was part of a complex of 24 semi-detached two-storey cottages in 13 buildings, which were erected by Sydney City Council in the 1920s. In 1926 the Council unanimously approved a scheme to look at building 60 homes in Camperdown, ‘and letting them at a rental which will be within the means of city workers and still will be sufficient to make the schemes self-supporting’.2 The better-known Ways Terrace at Pyrmont may have been part of the same scheme. Eleven of the Camperdown buildings survive.

Like Edmund Barton, Anthony Albanese was educated at a city school. Barton attended Sydney Grammar School (SGS). This might sound rather grand, but he started there in 1857, its first year in operation, so it was probably a school in embryo. Barton started there ten years before its transformative headmaster Albert Bythesea Weigall was appointed – SGS still only had 67 pupils in 1867! Albanese went to the nearby St Mary’s Cathedral College which, according to its website, was founded in 1824, making it an older foundation than SGS. Both prime ministers attended the University of Sydney. Barton graduated in 1868 and Albanese in 1984.

After graduation, Albanese was appointed as a research officer to the then Minister for Local Government and Administrative Services, Tom Uren.

I would like to think that as an 11-year-old Albo went walking up Bridge Rd into Glebe to see what the Federal Government’s purchase of the Glebe estates was all about, but it’s probably unlikely. However, as an 11-year-old, I was nervously venturing into The Rocks and Millers Point to look at old buildings, so it’s not impossible. I’m sure, though, with his close relationship with Tom Uren from 1984, Albanese absorbed Uren’s inspiring vision about urban conservation, nurturing communities and the right of all Australians to dignified and affordable housing.

The Glebe Society extends its congratulations to Mr Albanese. Although it has been commonplace for federal governments to play pass the parcel with town planning – ‘not a federal issue’ – they have enormous influence.

Just have a look at the great gash of Westconnex on the western side of Glebe and ask where the grant money came from? The federal government gave $1.5 billion and also provided a $2 billion concessional loan to the NSW government. It makes Uren’s 1974 purchase of 700 houses and over 20 commercial properties in Glebe for $16.5 million ($142 million in 2022 values) look rather cheese-paring. I hope the new government can use its influence to revive Tom Uren’s vision of public ownership of the Glebe estates to: