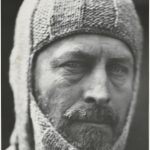 Geologist and explorer, Mawson is best known for his exploratory expeditions to Antarctica. He joined Shackleton’s expedition from 1907-9, and headed the Australasian Antarctic Expedition of 2011 – 14. The scientific work he undertook in this and later expeditions formed the basis for Australia’s claim to 42% of Antarctica as Australian territory.