Lew Hoad was a prominent tennis player in the 1950s. For five straight years, beginning in 1952, he was ranked in the world top 10 for amateurs, reaching the World No. 1 spot in 1956. He represented Australia in the Davis Cup with Ken Rosewall, winning the Cup for Australia four times from 1952-1956. Hoad turned professional in July 1957. He was widely regarded as one of the most naturally talented of tennis players, though inconsistent. He retired to run a tennis ranch in Spain, where he died of a heart attack. 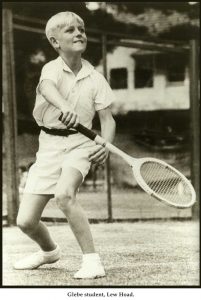 Lew and his younger brothers Graham and Larry lived with their parents – plus, for a time, their grandparents – at 43 Wigram Road, a single-storey terrace. The house, which the Hoads rented and later bought, was comfortable ‘but without frills or luxury’. At the rear of the Hoads’ house, between Wigram Road and Hereford Streets where the lots were unusually deep, were the tennis courts of the Hereford Tennis Club, and Lew became fascinated by the game. The Hoad boys were educated at Miss J Brincks’ kindergarten (Hawthorn College, 17 Toxteth Road, next to the Allen Memorial Methodist Church) and Glebe Technical School (now Glebe Public). At school Lew was seen as quiet and unassuming, average at Rugby League but obsessed by tennis. His passion for ‘a sissy’s game’ went down badly with his peers until he earned their respect by decking the school ‘tough’.

By age 11 Lew Hoad had reached A Grade with the Balmain Hardcourt Association. His first tournament appearance – both players were shorter than the ball boys – was against Ken Rosewall, his senior by three weeks. When Frank Sedgman and Ken McGregor turned professional Hoad and Rosewall were trained to be the new Davis Cup champions. Under coach Harry Hopman they quickly became household names, especially in doubles.

He is commemorated by the Lew Hoad Reserve in Minogue Crescent.