Reussdale and The Abbey – The Glebe Society

Ferdinand Reuss trained as a civil engineer in the British firm of Robert Stevenson (grandfather of Robert Louis Stevenson). After some time in the USA, Reuss came to Australia during the 1851 gold rush, eventually setting up an architecture practice in Sydney.

On land he had purchased on either side of Pyrmont Bridge Road, Reuss built houses, most of which he rented out to others. He lived in The Hermitage at 154 Bridge Road from 1866 until his death in 1896.

His houses include: Hamilton (156 Bridge Road), and Reussdale (160), perhaps the earliest example of High Victorian domestic design in Glebe. Number 177 is also attributed to him.

The Abbey at 158 was a Presbyterian church built by the architect Thomas Rowe on Broadway in the 1870s, then moved stone by stone to its present site in 1920. It was later converted into a restaurant.

Reussdale and The Abbey can be seen on Glebe’s Late Victorian Streetscapes Walk and on the Early Glebe Architects Walk. 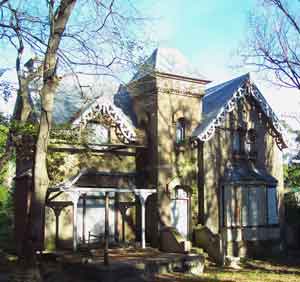