Who worked in your street? 21 Ross St, Forest Lodge – The Glebe Society

Who worked in your street? 21 Ross St, Forest Lodge

In 1943 the Communist Party of Australia (CPA) bought the sports newspaper, the Newsletter and its printery at 21 Ross St, Forest Lodge. The nominal purchasers were Katoomba businessman Bruce Joseph Milliss and CPA Treasurer John Spencer Simpson. Both men had thick Security files. After material was seized in a raid on his Sydney house during the brief period the CPA was declared illegal in 1940, Simpson went to Perth where he was gaoled for subversive activities. Milliss was pursued beyond his death in 1970 by ASIO which examined his probate in detail.

At the Newsletter Printery, Quality Press added race books and Trotguide to the Newsletter. Also printed were Il Risveglio for the anti-fascist group Italia Libera; Russia and Us for the Australian-Russian Society (its patrons Dr Hewlett Johnson the ‘Red Dean’ of Canterbury and Bishop Burgmann of Goulburn, its president Clive Evatt and vice-president Jessie Street); Filmnews for the Sydney Filmmakers Co-operative in the 1970s; and Education for the NSW Teachers’ Federation, under a new imprint Spotpress, in the 1980s. Women’s Liberation posters and anti-Vietnam War materials were also printed at Ross St.

The Communist Party’s most important publication was its official organ Tribune (successor to The Communist and the Workers’ Weekly) which rolled off the Forest Lodge press for almost five decades.  Distribution of the flagship newspaper relied on dogged CPA members who sold it on Sydney streets in suburbs as diverse as Pymble and Balmain. To encourage competition, their names and sales numbers were published regularly. Other CPA literature included the Maritime Worker, the Australian Worker and the Communist Review.

Newsletter Printery was newsworthy in October 1944 when printers at Fairfax’s Sun agitated for a 40-hour week. The proprietors decided to send copy elsewhere for inclusion in a composite paper and sacked or suspended any journalist who refused to write for it. During the 13-day dispute, nine editions of an emergency News were produced by journalists working out of the main CPA building in George St and printers operating the Ross St plant. Newsagents in 1951 refused to home deliver papers when the Prices Commissioner reduced their profit margin despite ruling a penny increase (to fourpence) a copy. Newsagents displayed posters printed by Newsletter: ‘Price Rise Conditions Unfair’.

In 1945 Newsletter pamphlets supporting Indonesian independence turned up in a government workplace. An incensed Eric Harrison, deputy leader of the Liberal Party, urged a ‘Red purge’ of Communists employed by the Public Service.

In July 1949, in an atmosphere of growing McCarthyism and four months after the formation of ASIO, the ‘barn-like’ office of the Ross St printery was one of the premises raided during a crackdown on the CPA. Officers scrutinised Fatty Finn and Middy Malone comics (whether these were the staff’s light reading or copies sent for review is unknown) but what they were supposed to be looking for was evidence of bank transactions supporting suspicions that money was being sent to striking coal miners. The affair ended with a court ruling that any withdrawals were justifiable business expenses.

In 1950 the federal Attorney-General received a copy of Wharfie from ‘a concerned citizen’ anxious to protect the prime minister’s reputation. The roneo-ed newsletter attacked Menzies’ involvement in the Korean War and urged readers to sign a petition to ban the Atom Bomb. William Charles Wentworth, a staunchly anti-Communist parliamentarian, lobbied for sedition charges to be laid against Adam Hutton Ogston. However, the case was considered ‘borderline’, and the matter lapsed. (In the same year, Ogston stood unsuccessfully as a Communist candidate in the federal elections, addressing supporters in the Glebe School of Arts.) 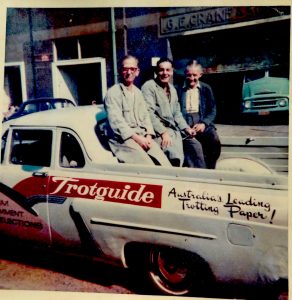 A Central Committee member who gave his occupation as ‘political organiser’, Ogston was in trouble again in the Coronation year, 1953, over an article in the Communist Review. ‘The “Democratic” Monarchy’ criticised the cost of the celebration and asserted that the royal family had nothing in common with ordinary people but was a bulwark against social change. With the other key Ross St personnel (Herbert Bovyll Chandler and James Norman Bone), Ogston was charged with sedition. Agents raided 21 Ross Stand searched Ogston’s Sans Souci house and Chandler’s bedroom at Pymble and photographed diaries, film festival records, address books and account books. Much of the scribbled material was barely legible. While finding the offending article in bad taste, the Federal Court dismissed the charges and awarded 200 guineas costs to the three men who maintained that the government was looking for any excuse to attack Communists – Menzies using the Red scare whenever an election was imminent.

The Ross St premises and plant were auctioned to a mystery buyer in 1951, but the CPA remained tenants. In 1989 the printery moved to Victoria Rd Marrickville. Two years later, the CPA was dissolved. The last Tribune appeared on 3 April 1991; its leading article opposed the Gulf War. The author was Denis Freney, whose wake was held in the Harold Park Hotel in 1995.

Postscript: Another newspaper printed locally was The Rock, which ran off a press owned by The Rock Newspaper Co. and Protestant Publications at 110 Glebe Point Rd. In 1949 its publishers were sued for libel by a Hobart parish priest over an article claiming girls at a Sandy Bay laundry run by the Catholic Church were ill-treated. The £10,000 suit appears to have been dropped. No. 110 was later the premises of Liberty Press.