Another part of the Blackwattle Bay foreshore walk has begun to fall into place with the start of work on the boat pontoon near Bellevue.

The pontoon is intended for small boats, such as water taxis, and hopefully will one day allow visitors to arrive by water at whatever facility eventuates at Bellevue now the tea rooms proposal has fallen by the wayside. 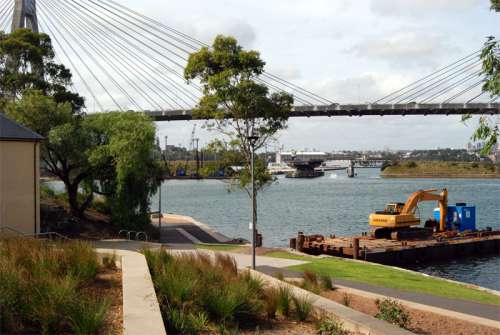 However the news about the southern end of the foreshore walk is not so encouraging.  The long-awaited development application for the waterfront area at the Blackwattle Secondary College is still pending.

Funding for this section (the last before the Bridge Road wharves which are subject to the on-again, off-again processes of NSW Maritime) had been foreshadowed for next financial year, but it seems this is not certain.  If funding is available, Council has quite a task in reviving the project which has been in abeyance for many months.  To achieve completion in 2009-10, preliminary work, such as public consultation, will have to start immediately. Some time ago NSW Maritime indicated that it would recall proposals in late 2008 for the redevelopment of two of the three Bridge Road sites on Blackwattle Bay between the secondary college and the Fish Market.  We’ll keep you posted!