The Seventies – The Glebe Society

Bulletin no 5 of 1971
How Different Things Could Have Been

From the beginning the Glebe Society was tenacious in keeping track of development applications in Glebe and lobbying against them if needed. This cement plant would have been next to Jubilee Park and opposite where Bicentennial Park now stands, at the time an industrial area. In the mid-1970s they also saw off plans for a container terminal in Federal Rd.

Bulletin no 3 of 1976
‘Expressways through Glebe’ 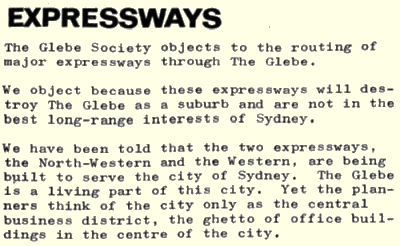 In the 1960s and 70s the Department of Main Roads had plans for two major freeways to go through and under Glebe, which would have meant demolition of large swathes of Glebe. Following protests from residents in Glebe and other affected areas, the plan was finally abandoned in 1976. 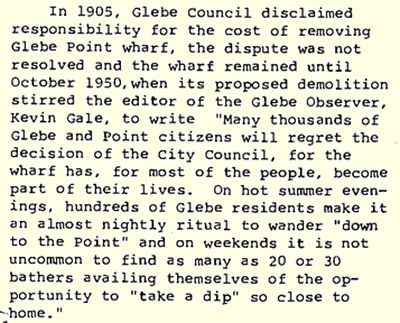 Ferries operated from Glebe during the 19th century and were at their zenith in the 1890s but ceased early in the 20th century, according to research by Max Solling in the same edition of the Bulletin.

Periodically the idea of reinstating a Glebe Ferry has been raised and is the subject of a current campaign by Greens MP Jamie Parker. See also The Nineties below. 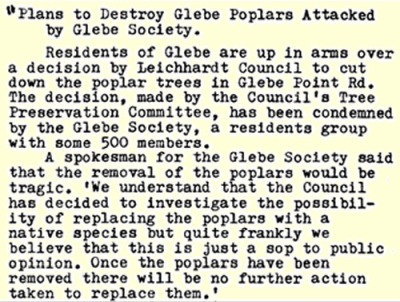 In March the same year the Council agreed to ‘the request for removal of the trees and their replacement with a more suitable species’. Note: In 1978 Glebe was within the Leichhardt Council area. It became part of the City of Sydney again in 2003. 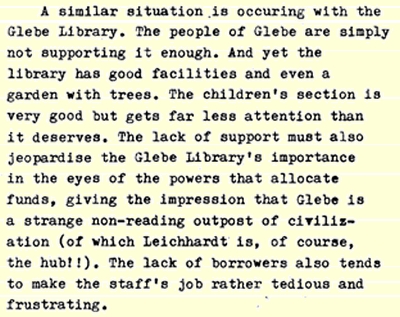 Glebe Library was then a branch of Leichhardt Library and located at 191-195 Bridge Rd. Little did they know how well patronised the Library would become once moved to the corner Glebe Point Rd and Wigram Rd! The ‘similar situation’ referred to was falling numbers at Forest Lodge Public School.

Bulletin no 9 of 1978
Bidura Site Development 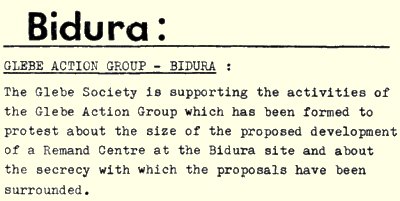 The neo-brutalist Bidura Children’s Court was built, albeit not as large as first proposed, and it opened in 1983. Less than 40 years later, proposals for another very large development on this site, including demolition of the Children’s Court building, are under consideration by the Land and Environment Court. See the Heritage Subcommittee Annual Report 2017-2018 for more details.

Bulletin no 4 of 1979
University Hotel

The site of the University Hotel for nearly 100 years from the 1850s to 1950s, University Hall on the corner of Parramatta Rd and Glebe Point Rd now provides student housing. In 1979 there were plans for its demolition and replacement with a 12-storey development.

Bulletin no 5 of 1979
Opening Up the Glebe Foreshore

The opening up of the Glebe foreshores to the public has seen a major change in the amenity of Glebe. In 1979 the Glebe Society developed a detailed Waterfront Proposal and campaigned for its implementation. The Society’s proposal has been implemented in stages since then with final section adjacent to Glebe High School opened in 2014 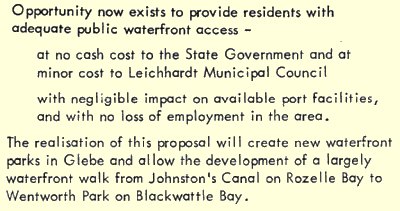