Following representations from the Society the steel roller shutter has been removed (see Jul Bulletin).

The Lord Mayor officially opened Harold Park on 29 July, and the first occupants moved in later in the week. The secondary entrance at Ross St is now open, but is left turn in and out only. The primary entrance, opposite Minogue Cresc, which will permit right turns, will probably not be open until next Feb.

In May I reported that a provider of student accommodation, Urbanest, had acquired this site, and lodged an application which was, in effect, a variation on the one approved by the Land and Environment Court, based on the previous use of the site as a motel.

Council pointed out that this was not possible, as Urbanest should lodge a new application for the use of the site exclusively as student housing, and this they have now done. The proposal is quite large, with a total of 164 beds in one and two bedrooms.

Council does not have guidelines specifically for student housing, despite the number of proposals that have been approved. The Society has suggested developing such guidelines, and Urbanest has agreed to assist the City to do so. However, all this is too late for this application, which will therefore be assessed under the rules for boarding houses, which are permitted in residential areas.

The Committee discussed the proposal at its Aug meeting, and as a result, I lodged comments that asked Council to apply normal rules for multi-unit developments in residential areas. These include ensuring the amenities of nearby residents are protected, by reducing density if necessary, and Urbanest be required to meet its obligations for providing some parking, contributing fully toward Council amenities, providing rooms accessible to those with disabilities, and common areas and facilities at an appropriate level.

The University Motor Inn site has been derelict for some time, and a number of proposals, all of them unsatisfactory, were rejected until the Court found one it could approve. Of course it is desirable for the site to be redeveloped provided the nearby residents and the Bishopthorpe Conservation Area are protected. The site is close to the University of Sydney (and other universities and colleges) and there are a number of student hostels nearby, so student housing is a suitable use.

The NSW Government has announced the proposed sale of the entire site of Bidura, former home of the architect Edmund Blacket while he was building the University of Sydney. The two buildings fronting Glebe Point Rd, Blacket’s house and the ballroom built by his daughters, are Heritage Items, but the building at the rear is recent and has been the object of speculation almost from the moment it was built. The Children’s Court is currently located there, but the main building was designed as a remand centre for young offenders, and was superseded by more modern solutions almost immediately. Community Services has used it for training purposes in recent years.

Some years ago there was speculation the building might be sold for a school or similar institution, but its design is difficult to adapt, although it includes a basketball court and swimming pool. If the site were sold for housing it is likely this building would have to be demolished.

This would be no great loss, but of course it is necessary to protect the historic Blacket building and to ensure any new building at the back does not detract from its heritage value. 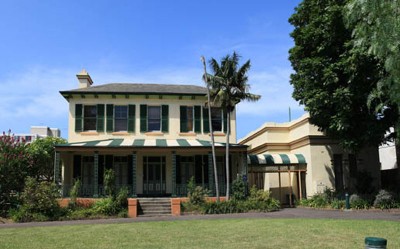 On 17 Aug the President circulated the following email to members. I add my voice to his to encourage you to donate to what is essentially a campaign conducted by the Society and its fellow organisations:

The Glebe Society is an affiliate of this very successful statewide community network, which was influential in the defeat of the NSW Government’s proposed new planning bill. This bill would have restricted community engagement and privileged economic growth over social and environmental sustainability. In other words in its state campaign BPN fought for the very aims of the Glebe Society as expressed in our constitution. As a Society we have given donations, lobbying and advice in support of BPN. Right now BPN needs crowdsource donations so I implore you to check out their website, personally donate and invite your personal network to do the same.