From the President – The Glebe Society

It has been another month of great events. On 5 June, Meredith Burgmann, Helen Randerson and Heather Goodall led a walk exploring radical Glebe. We visited Women’s Liberation House, which the Society has nominated for a blue plaque (see p. 8 of this Bulletin), and heard about the green bans. Meredith, who wrote the definitive book on the subject with her sister, Verity Burgmann1, pointed out the need for more detailed research into Glebe’s green bans – are there any volunteers for this? It needs to be done now while it’s still within living memory.

We then heard about the 1971 anti-Springbok tour campaign, which was masterminded from Glebe. Meredith explained that the smoke bombs used to disrupt the match were actually flares purchased from a ship’s chandler in Glebe. They all pretended to be yachties to buy them. Meredith, and her sister Verity, famously occupied the field of the Sydney Cricket Ground, Verity getting hold of the ball and, according to The Bulletin, owned by that great radical Sir Frank Packer (winking), she made the best kick of the match. There’s nothing like an Abbotsleigh education to broaden your horizons.

We also heard about the NSW Prisoners’ Action Group’s half-way house in Glebe Point Rd CAMP Inc, Gay Lib, Women’s Lib, and the Tranby Aboriginal Co-operative College where Eddy Mabo studied. In the 1972 election, David Widdup of CAMP stood against the Prime Minister Billy McMahon in the seat of Lowe.

What was my favourite site? The former Presbyterian Church in Bridge Rd where the Anarchists’ Conference was held. Meredith attended. She said it was surprisingly very well organised. As an aside, this church was relocated to Bridge Rd from Parramatta Rd in 1927. In the 1970s, there were plans to move it to the Scots School Bathurst, but this never happened. However, in 1973 the 1885 Nicholson & Lord pipe organ was relocated to the Castle Hill Baptist church. Perhaps, Dorothy Davis, this is a future Glebe Society event – a visit to the Castle Hill Baptist Church with a party of anarchists to hear our organ?

Well done, Meredith, Helen and Heather. I hope you do a second instalment soon.

On 16 June I did a repeat of The Good, the Bad and the Ugly – a century of infill housing in Glebe. There were some variations. Poignantly, numbers 17-31 Cowper St had been demolished – only the palm trees of the courtyard remaining, but they are soon to go. We visited the very fine 82-84 Wentworth Park Rd, which the NSW Government’s Land and Housing Corporation (LAHC) also plan to decimate, as well as the Philip Cox-designed Franklyn St flats, which LAHC plan to replace with 14-storey buildings. The gardens of the site will become roads. They are roads which cars will drive along, which is the antithesis of a garden but fear not, the plans say they are ‘living streets’. Future residents won’t live long if they loiter on the tarmac to smell the non-existent daisies and get hit by a car. Perhaps that’s a clever strategy to reduce the public housing waiting lists?

On Thursday, 21 July 10.15 am-2.15 pm, Dorothy Davis will be leading a tour of Leading Edge-Architecture and Health Research at Sydney University. For more information and to book, go to https://heath-‌research-architecture-‌usyd.eventbrite‌.com.au. [Note: As at 20 July 2022 this Walk has been postponed due to the current COVID outbreak].

Pleasingly Glebe, through the work of the Rev William Binnington Boyce, got a mention at the Fisher Librarian Philip Kent’s inaugural lecture at Sydney University on 10 June which compared the history of the University of Sydney’s Fisher Library and the University of Melbourne’s Baillieu Library. Boyce, who lived at Rothwell Lodge in Ferry Rd, was a member of the University Senate and part of its inaugural library committee. He was a great bibliophile – on his death, he bequeathed 2,000 volumes to the Wesleyan Theological Institute at Stanmore. At the lecture, which was held in the original Fisher Library Reading Room, now known as the MacLaurin Hall, his portrait presided over the bar. Others may disagree, but I don’t think Boyce would have been offended by this. He seems to have been more of a life-giver than a life denier – not a narrow man. Rev Boyce and Rothwell Lodge feature in the Glebe Society’s self-guided walk, The Pocket Parks of Glebe (https://glebewalks.‌com.‌au/‌?walking_tours=‌the-pocket-parks-of-glebe).

Lastly, our compatriot organisation Hands Off Glebe (https://www.facebook.com/HandsoffGlebe) is organising a film screening as a fundraiser to help their campaign to save Franklyn St and Wentworth Park Rd. The film is called The Public. It is about a group of homeless people who take over a library on one of the coldest nights in Cincinnati’s history as they need shelter. Hannah Middleton of Hands Off Glebe says the story revolves around the library patrons, who are homeless and marginalised, and the librarians who build emotional connections and a sense of obligation to care for the regular patrons. The patrons turn the building into a shelter for the night by staging a sit-in. What begins as an act of civil disobedience becomes a standoff with police and a rush-to-judgment, media constantly speculating about what is happening.

Director/Writer Emilio Estevez has created a real look into the socio-political plight of the homeless and the situations they face when freezing temperatures force them to seek shelter when insufficient shelters exist. The focus on both libraries (places of knowledge and learning) and class makes Emilio Estevez’s movie one that everyone should see.

The screening will be at St John’s House, Glebe Point Rd in July. The date is yet to be determined. For more information send an email to glebegrapevine@‌gmail.com and put ‘Please send details on the screening of The Public’ in the subject box.

1.  Green Bans, Red Union: The Saving of a City (1998) by Meredith Burgmann and Verity Burgmann. (https://‌www.‌newsouthbooks.‌com.au/books/‌green-bans-‌red-union/). 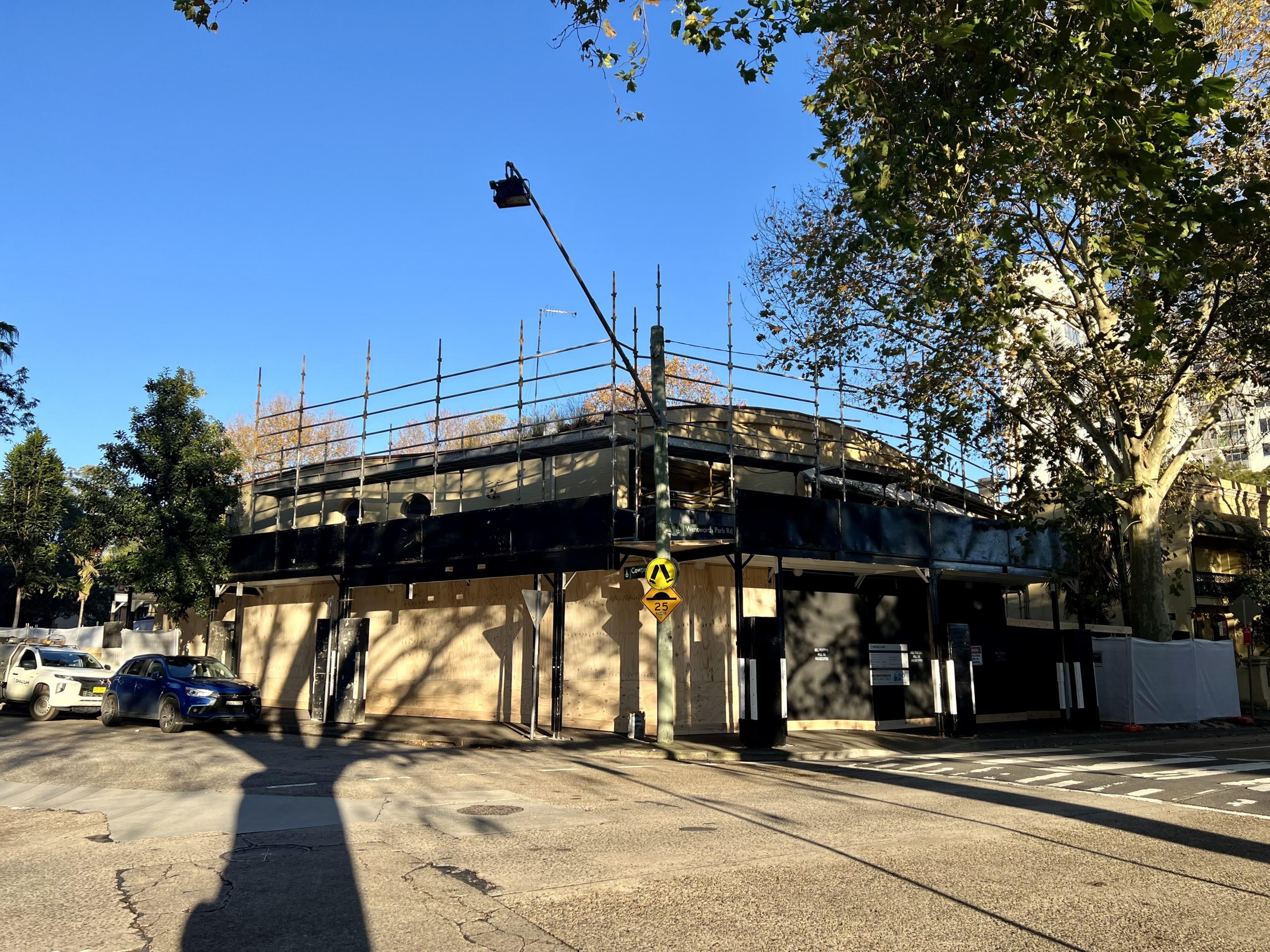 More demolition. On 6 June, scaffolding is being erected in preparation for the demolition of yet another positive contribution to the streetscape: 2A-D Wentworth Park Road. Number 17-31 Cowper St next door has already been demolished to make way for an 8-storey building. (Images: Phil Vergison)