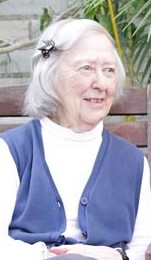 Artist Janet Venn-Brown died on 6 August, aged 96. Janet had a long association with Glebe and the Glebe Society, so with great sadness, we learnt of her death.

Until quite recently, Janet lived in Glebe, at St Johns Village, from where she moved to Rushcutters Bay. Janet attended many Glebe Society events including Thirsty Thursdays. The Society was always happy to advise members of her upcoming art exhibitions (Bulletins 1/2012; 9/2011; 10/2011; 1/2012; 10/2012).

It would be an understatement to say that Janet had lived an extraordinary life. The National Library of Australia provides a brief bio:

Janet Venn-Brown was born in Sydney in 1924, grew up in Drummoyne and went to school at Presbyterian Ladies College, Croydon. She undertook secretarial studies working at Angus and Robertson bookshop and Ure Smith Publishers, and studied painting in evening classes with Guiseppe Bisietta. She stopped in Italy on her way to England in 1952, returned there and remained for 44 years living in Rome. Her work has been exhibited in Naples, Rome, London, Amman, Baghdad and Sydney, where she returned to live in 2008.

Janet Venn-Brown edited Per un Palestinese (Milan, Mazotta Editore, 1979) as a memorial to her partner, the exiled Palestinian intellectual Wael Zuaiter, killed by Israeli security forces on 16 October 1972 in retaliation for the massacre of Israeli athletes at the Munich Olympic Games. An English translation, For a Palestinian: a memorial to Wael Zuaiter was published by Kegan Paul International in 1984. (https://nla.gov.au/nla.obj-346516058/findingaid)

Even as her health started to let her down, Janet remained passionately committed to her art – always on the look out for an opportunity to paint a Glebe interior. Jude Paul, Glebe Society Secretary and Jane Gatwood, Glebe Society Treasurer, have two watercolours of their house, which Janet painted in 2013. Jude explains:

I so enjoyed her time at 294. … I’d collect her from St Johns and bring her here. … She would quietly sit and paint for a couple of hours, eat the sandwiches we’d made for her lunch, nod off for about 20 minutes or so and then paint again for another couple of hours. Her two paintings of 294 took several months to complete, but no-one was in any hurry. 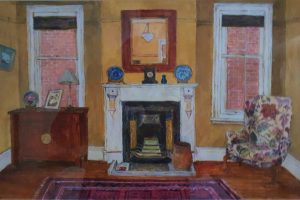 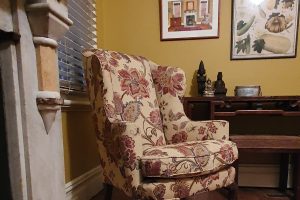 (Left) One of Janet Venn-Brown’s watercolours of Jude and Jane’s loungeroom. (Right) the painting can be seen on the far wall; the chair in the painting is in the foreground. (photos: Jude Paul)

One of these watercolours appears in Peter Manning’s book about Janet’s life and art, Janet Venn-Brown: A Life in Art (NewSouth Publishing, 2016). The author, Peter Manning, explained the book to our members in Bulletin 9/2016 (p. 6):

Many members will know of Janet Venn-Brown who has come to Glebe Society meetings and also offered to paint interiors of Glebe houses. At 91, she is still painting after 45 years in Italy and the Middle East. She was part of the art circle in Rome and Tuscany that included Jeffrey Smart and Justin O’Brien and many others. Now well-known journalist Peter Manning, for many years a Glebe resident himself, has written a full biography of Janet’s extraordinary life from the time she left Sydney in the early 1960s to when she returned in 2008. It includes the shocking assassination of her Palestinian partner, Wael Zuaiter, in Rome in 1972 by Israel’s Mossad for allegedly being involved in terrorism at the Munich Olympics. It was later admitted he was innocent of the charge. The book includes 93 of Janet’s paintings throughout her life – abstract, landscapes and interiors – all in high-resolution colour.

Janet Venn-Brown has made a substantial contribution to Australian art and to Glebe. Glebe featured strongly in the art of her later years and her international reputation has, by association, elevated ours.