When I wrote about Arcadia Rd in Bulletin 4 of 2017, I had enough information to write about the first owners of Arcadia Rd (north). Since then, I have learnt more about the NSW Land Records system and can now report on the southern side of Arcadia Rd.

The Toxteth Estate, owned by George Wigram Allan of Toxteth Park (now St Scholastica’s), was 96 acres of land lying between Wigram Lane and Victoria Rd on the one side, and between Glebe Point Rd and Harold Park on the other. 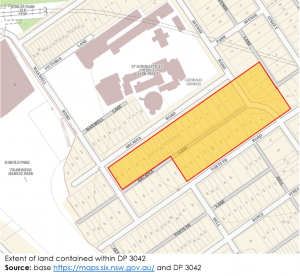 The Toxteth Estate was progressively subdivided from 1884. Undeveloped land on the southern side of Arcadia Rd became Lots 1 to 22 in Deposited Plan (DP) 3042, the extent of which is shown below on a current plan with house numbers. These Arcadia Rd lots were sold between April 1894 and August 1895.

As was typical throughout the Toxteth Estate, many of the purchasers entered into mortgages with solicitors Reginald Charles Allen and Arthur Wigram Allen. The builders, too, availed themselves of this opportunity. However, as we will see, some found out the hard way that you did not want to miss a scheduled repayment!

Builder Patrick O’Reilly was responsible for the distinctive houses at Nos 5, 7 and 9; he lived in Leichhardt at the time. To fund the land purchase and build the houses, on 1 June 1894, O’Reilly took out a mortgage with solicitors Reginald Charles Allen and Arthur Wigram Allen, and another with George Boyce Allen. A few months later, on 13 October 1894, O’Reilly established a further mortgage with Reginald Charles Allen and Arthur Wigram Allen. A few days later, on 18 October 1894, he took out yet another mortgage, this time with Henry Alexander of Sydney. 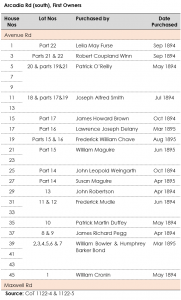 The signs were there that O’Reilly was struggling financially, so it was no surprise that Reginald Charles Allen and Arthur Wigram Allen stepped in to protect their investment in February 1895. O’Reilly was able to sell No 9 in January that year to John Cole of Ultimo, a school teacher (so we can assume the house was built by then) who lived there until 1910. The house was then sold to Jane English, married to the draper, John English, in August 1910.

Nos 5 and 7 Arcadia St, built by Patrick O’Reilly, were sold by the mortgagees in July 1895 to merchant Joseph Edward Lepper who lived in No 7 until about 1900. After letting No 5 to tenants for a few years, Joseph sold the house to Catherine O’Brien in March 1898.

Patrick O’Reilly was declared bankrupt in 1896. I have not been able to establish his whereabouts after that time.

Builder and contractor Joseph Alfred Smith was born in Bethnal Green, London, in 1864. He was the only son of cab driver Henry and his wife, Jane. Smith arrived in Sydney in the mid-1880s as a cabinet maker before becoming a builder in Sydney’s inner west, living at Leichhardt and Annandale. He married Anna Louisa Isenhood on 29 March 1899 at All Souls’ Church, Leichhardt.

When builder William Maguire purchased part of lot 15 in June 1895, we have to assume that the astute Allen family knew that he had been declared bankrupt on his own petition five years previously.2 William Maguire must have considered himself fortunate to have secured a mortgage from Reginald Charles Allen and Arthur Wigram Allen. Lot 15A is now occupied by a fine pair of two-storey houses, Nos 21 and 23 Arcadia Rd. These houses are a testament to Maguire’s building skills. But things were not going well for Maguire: in May 1901, the mortgagee in possession sold the houses to Constable Joseph Jackson of Glebe. Tenants had moved into these houses in 1897.

Susan Maguire (née Pyne and wife of William) purchased part of lot 14 in April 1895, also with a mortgage from Reginald Charles Allen and Arthur Wigram Allen. No 27 is similar in style to Nos 21 and 23, which suggests it was probably built by her husband, William Maguire. William and Susan only lived at No 27 for one year, 1896. Down on their luck, the house was sold by the mortgagee in possession in January 1899.

Susan had been born in Victoria in 1858 and died in 1939, aged 81, while living at Crows Nest. She is buried with William at the Macquarie Park Cemetery.

Lots 2 to 7 were purchased in March 1895 by William Bowler, a builder from Newtown and Humphrey Barker Bond a builder from Petersham, with a mortgage from Reginald Charles Allen and Arthur Wigram Allen. By July the same year the mortgagees had sold these lots to builder William Maguire because Messrs Bowler and Bond could not service the loan.

The Allens then provided a yet another mortgage for William Maguire.

These six lots were amalgamated into three on which William Maguire built three houses – Nos 39, 41 and 43. As we know, William Maguire became insolvent, leading to the mortgagees selling the completed houses during 1898 and 1899.