Location:
Foley Park - six plaques on strutures in the park

The traditional owners of the Glebe area are
the Cadigal band, from the Dharug language
group. The Cadigals’ land stretched along the
southern shores of Port Jackson from South
Head to the present-day suburb of
Petersham. The Wangal Wangal clan has also
been associated with the area.

As Sydney Town expanded after the First Fleet’s
arrival in 1788, Glebe’s Indigenous population
diminished greatly, and there is no evidence of
the Cadigal people’s original presence in
modern-day Glebe.

The word “glebe” dates back to the Middle Ages from
around the fourteen century and comes from the
Latin “gleba” or “glaeba”, meaning “clod, land or
soil”. The word was used to represent a piece of land
belonging to the Church and lent temporarily to a
member of the clergy to provide income.

In 1790, the first Governor of New South Wales,
Arthur Philip, granted four hundred acres west
of the Parramatta Road to the Church of England,
in the person of Reverand Richard Johnston, who
was chaplain to the First Fleet. The four hundred
acres were allocated as a potential farm site, and the
first buildings were constructed in 1833.

In 1828, the land was divided into twenty-eight
allotments, with three of these, including
Johnston’s farm, kept by the Church and the
rest sold by auction. 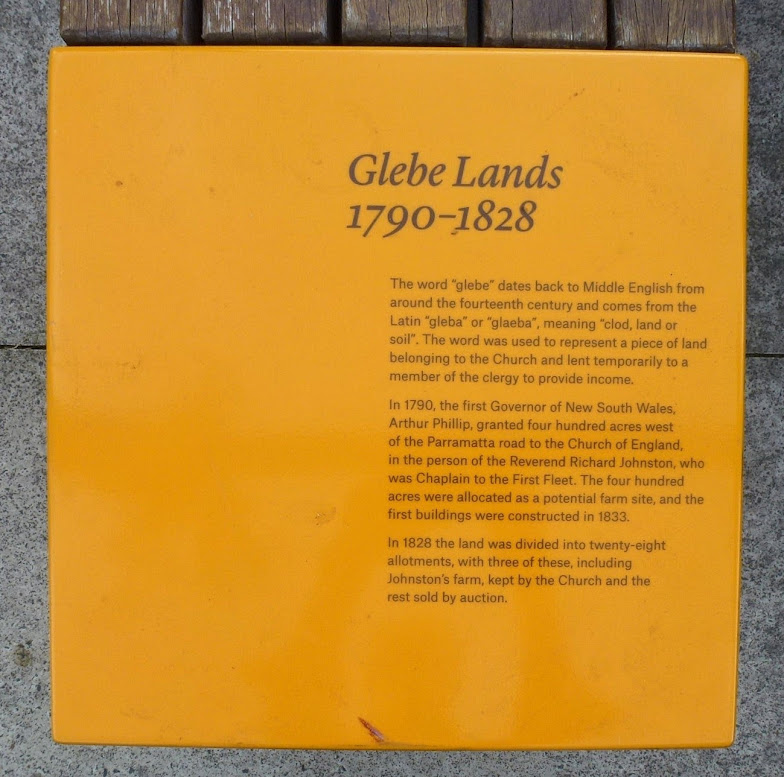 This period saw the site’s development for private
residential use. In 1828, the site was a cleared rural
area, which might be difficult to imagine today.
Later, as the area developed, it became part of a
sub-divided site in an urban setting.

At the Gebe auction sale in 1828, George Williams
purchased Lot 26 for #509, and commissioned
architect Edward Hallen to design the first
gentleman’s residence in Glebe. Edward Hallen also
designed Sydney Grammar School and the Argyle
Cut at The Rocks. The house was completed in
1829. Williams called it Hereford House, after his
birthplace, Hereford, in England, but never lived in it himself.

Property owners after Williams made various
improvements and additions to the house, including
a verandah (1832), a servants’ wing (1834), a dwarf
stone retaining wall and a ballroom structure
(1904). During Judge William Wilkinson’s residency
(1887-1908), many trees were planted and he also
established an ornamental garden.

As with many of the original major houses, the site was
chosen to allow a view to the harbour or to Flagstaff Hill.
From the highpoint on the verandah of the former Hereford
House, a clear site line was maintained to Flagstaff Hill.
In an age of hand delivered communications this allowed
an instant visual signal to be relayed from the docks to the
surrounding residents. By the simple method of a flag raised
on Flagstaff Hill, a person standing at this spot was alerted
to arrival of passengers and deliveries into the harbour.

In 1911, Hereford House was purchased from the
Wilkinson Estate and established as an adjunct to
Sydney Teachers’ College.

The Hereford House students were different from
the mainstream students at Sydney Teachers’
College; they were mainly young men and women
who had previously earned their living in some other
way (often on country towns or on farms). Hereford
House offered a six-month short course, later
extended to twelve months, for students, before
they were appointed to teach in “bush” schools.

From 1912-1915, part of the garden were used
as Model School gardens, and in 1920 part of the
grounds next to St John’s Church boundary
became the site of a War Memorial.

Eventually the Leaving Certificate became the
minimum qualification required to begin teacher
training, the short course was discontinued and
the college transferred to the University of
Sydney Campus

After the Teachers Training College moved
to the University of Sydney Campus,
Hereford House was used as recreation rooms by
St Johns Church from 1931-1933. The house was
demolished in the mid-1930s during the creation
of a local rest park. The new park contained
tennis courts, a children’s playground and a
Wireless House, used for community radio
broadcasts (built in 1934).

The land was owned by the Department
of Education until 1944. At that time the
Department agreed to hand over the land as a
public park, on the provision that a baby health
centre be built. This facility was opened in 1951,
on the site of the former tennis courts.

Posted on September 16, 2015 for Peter Thorogood