Good Things Happen When They Are Community Initiated! – The Glebe Society

As reported in the August Bulletin, Mark Weisser was acknowledged for his community work in Glebe. The inspiration to recognise Mark Weisser was the action of one society member, Mark Cashmore, a “regular” on the foreshore with his dog, Dingle. City of Sydney was approached to ascertain how Mark could be recognised. The Lord Mayor, Clover Moore wrote a letter of appreciation. Robyn Kemmis, Deputy Lord Mayor, formally read the letter in the presence of a very large group of local residents, Glebe Society members and accompanying dogs on Friday 19 July at 5pm.

It had been a very cold wet day and it was uncertain as to how many people would brave the weather. The weather improved dramatically and everyone arrived! Robyn read Clover’s letter to Mark surrounded by an enthusiastic crowd. Everyone cheered and clapped in recognition of Mark’s contribution to the community. Apart from walking his own dog, he also walks neighbours’ dogs, and collects copious bags of rubbish from the streets and the shoreline. The City collects 19 bags each week from his house. In addition Mark, on his daily peregrinations, brings cheer to people with his extroverted and unique salutations. He is also known to converse in German with backpackers on the bus.

Mark’s response included a personal account of the impact of marijuana on his life and his subsequent health. He then treated us to a song and stepped on the sandstone parapet, faced the Anzac Bridge, eloquently praised the sunset and “flew” into the bay. It was high tide! There was some initial concern as to whether Mark could swim. His mother reassured us that he was a very strong swimmer. He swam back to shore and was helped out to a spontaneous rendition of  For he’s a jolly good fellow. Everyone moved off into the darkness feeling very exuberant about our much cared for local identity.

What is significant? A very simple event and the initiative of one person brought a large group of locals together to recognise Mark and in so doing, celebrate the value of community. 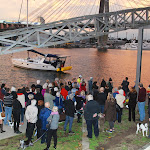 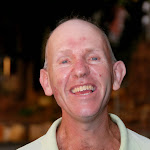 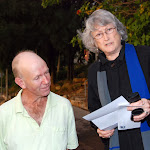 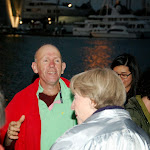 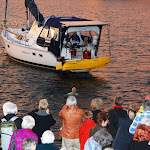