Tranby cottage was built in about 1840 prior to the subdivision of the Toxteth Estate. Its low lines and broad proportions make it an interesting example of an early colonial dwelling. George Allen, an influential solicitor and Wesleyan Methodist who became Mayor of Sydney bought the Toxteth Estate and built Toxteth Park in 1831, a grand mansion for his family. Allen’s daughter married a prominent Sydney architect George Allen Mansfield and they lived in the sandstone cottage on the Toxteth Estate, which is now known as Tranby.

Reverend William Binnington Boyce bought Tranby in 1887, The Reverend John Hope of Christchurch St Laurence and the other trustees purchased the cottage in 1946, and used it as a hostel for students from the University of Sydney. In 1957 they donated Tranby to Alf Clint and what was to become the Co-operatives for Aborigines Ltd.

Since 1958 it has been the home of the Tranby Aboriginal Cooperative College, the oldest independent adult Aboriginal education centre in Australia. 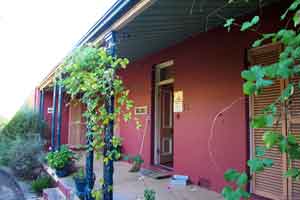