Lyndhurst is a symmetrical Regency, two-storey, brick villa (rendered to give the appearance of stone).  It originally stood on 36 acres of land.  It has shutters to windows and French doors, the latter opening onto wide verandahs enhanced by plate columns.

Lyndhurst was designed by John Verge and completed c1835 for Dr James Bowman, Principal Surgeon of Sydney Hospital and the son-in-law of John Macarthur.

Because of its proximity to the hospital, James Bowman became interested in Glebe and, by 1833, had purchased 36 acres for 1,500 pounds.

By this stage John Verge was building Camden Park for his brother-in-law, William Macarthur, and thus, Verge began to build Lyndhurst by year-end, with the villa having its finishing touches in 1837.

Lyndhurst featured a portico of coupled Tuscan columns with the back enclosed by single-storey domestic quarters (subsequently demolished in 1878 and 1885 upon subdivisions) and only the main two-storey block remains today. As both Lyndhurst and Camden Park were built contemporaneously, it is not surprising that they have common features, such as the size and proportion of the main reception rooms, the joinery and “plaster-groined” ceilings etc.

Following James Bowman’s retirement in 1838, Lyndhurst was used for a few years by the Macarthur family.

The use of Lyndhurst as a residence was short-lived.  In 1847 it became St. James College, to train young men for the clergy until 1849.  Lyndhurst was then purchased by the Catholic Archbishop and St. Mary’s College for the classical education of upper-class secular and day students, as well as priests for the ministry.  By 1870 Lyndhurst had declined and the grounds were subdivided in 1878.  In 1882 Morris Asher converted the building into a maternity hospital.  A further subdivision of land took place in 1885.  After the 1890s, the building was used successively as a rooming house, a meeting place for the Free Presbyterian Church, an ice-cream factory, a timber works and a printing workshop.

In the 1970s the State Government proposed to demolish the house to make way for a freeway, a proposal successfully opposed by a number of community groups, including The Glebe Society.

In 1972 when The Glebe Society was in its infancy, the NSW government proposed that Lyndhurst should be demolished for the north-western expressway through Glebe. After a long public campaign, the expressway was abandoned and historic Lyndhurst was saved, thanks largely due to the efforts of our Society’s founding members who were prepared to stand before bulldozers and put themselves at risk. Although Lyndhurst was in a deplorable condition at that time.

Lyndhurst was restored by the Architect and Heritage Consultant Clive Lucas OBE and the building became the offices of the Historic Houses Trust for two decades.

The house is now in private hands.

Lyndhurst can be glimpsed on the route of the Pocket Parks of Glebe Walk. 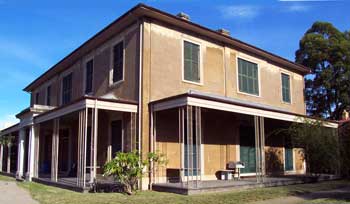