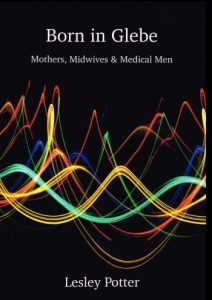 Intrigued by a small group of midwives working in the suburb of Glebe in the late nineteenth century, the author sets out to discover the identity of these women and the nature of their midwifery practice. Along the way, investigating those who were present at a number of birth registrations for the year 1890, to her amazement she discovered there were many other women acting as midwives and attendants at the confinements of Glebe women. The majority of these midwives were untrained, underlining the taunt of Sir James Graham in the NSW Parliament that Sydney was honeycombed with such women. Despite their reputation as dangerous practitioners most of these women were capable and safe accoucheurs despite the troubling maternal and infant mortality statistics of this period.

Potter positions maternity care within the local historical context of Glebe in Sydney at the closing of the colonial period and before the birth of the Australian nation. Appraising the lives of ordinary people, mothers as well as midwives and medical men, she relates how birthing was conducted on the cusp of medical obstetric advancements in this important area of health and wellbeing. It also enables the reader to appreciate the growing concern of government and society for the welfare of the emerging nation determined by its population growth. [Extract from the book’s blurb]

Lesley Potter is a retired nurse and midwife with an eclectic academic background; with Bachelor in theology, Masters in English Literature and a PhD in history. For about 40 years, Lesley worked as a midwife for in various Sydney Hospitals and is an expert in the history of nursing. She is the Honorary Archivist for the Australian College of Nursing (ACN) and deputy chair of the ACN History Community of Interest. In addition, she is an Honorary Associate of the Nursing History Unit of the Nursing School at The University of Sydney.