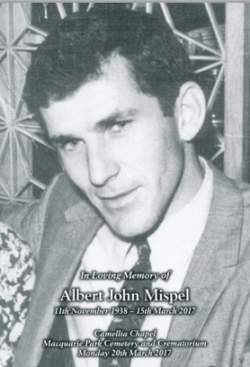 Albert Mispel, who died last month aged 78, was one of the early members of the Glebe Society, and one of its earliest honorary life members. He was referred to at a recent event as an intellectual, but Albert’s own preferred description of himself was that of an activist. The appropriateness of this was underlined at his funeral service which was very much a celebration of this aspect of his life. For the Glebe Society this took the form of many years of research, publicity and protest about the expressways planned for Glebe in the seventies of the last century. Even on a holiday trip to Europe in 1972 he and his wife Kathy attended anti-expressway meetings in Paris and London. A busman’s holiday indeed!

In the sixties and seventies the inner city suburbs of Sydney were regarded by government at both state and local level as slums, ripe for demolition to make way for a series of expressways and new apartment blocks, the typical three storey walk-ups favoured at the time by developers such as Parkes. In Glebe two expressways were scheduled to cut across the suburb, the Western and the North Western distributors, which would have dismembered the area. Anyone who was looking to buy a house in Glebe at the time would recall the maps at estate agents split up by those red striped bands marking the routes (see map right). However, the period was also one in which young professionals, working in the city, were looking to avoid long commutes to work from the outer suburbs to which they were being pushed, and the move began for a return to the inner city and the burst of renovation and restoration of older housing stock that started at that time. They had the energy and capacities to take on government and oppose these plans.

Albert came to Glebe in 1967 to teach and then stayed on. He was elected to the Society’s Management Committee in 1971 and in his ‘Meet the Management’ mini autobiography noted the many changes of the previous five years, loss of parkland for example, which made one want ‘to hold fast onto every brick of Glebe’. He was spending his days as Systems clerk and nights writing the Bulletin’s miscellany column – a series of paragraphs on local and overseas news with particular emphasis on planning and transport. His name first appeared on a front page article ‘Waiting for the Monster’ regarding the deviation in the original route of the expressway to avoid the dog racing track at the expense of the demolition of Lyndhurst – and so many private homes. The same issue included a flyer advertising a public meeting at Leichhardt Town Hall with the aim of stopping the project, one of the outcomes of which was the paint-in on Pyrmont Bridge Rd in February 1972.

Between 1971 and 1976, when the Wran Government abandoned plans for the expressways through Glebe, Albert was involved with and liaised with a number of groups opposing radial expressways to the city. He authored a number of articles for the Bulletin reporting on their activities. One of the major protests was at Fig St, where Albert was one of the speakers, alongside Neville Wran, Joe Owens, Joye Wallace and Bernard Smith. Several people were arrested on that occasion and Albert was one of those who organised support for them.

During the same period, Albert was at various times active on the Planning Committee and was Bulletin editor from August 1971 to mid-1974. In recalling Albert’s activities during these early days of the Society it is worth remembering that this was pre the internet, and gathering information was much more time-consuming and laborious. Glebe owes him a large debt.

Editor’s Note: Follow these links on the website for further information about Albert Mispel:
1. Interview with Albert Mispel about the Anti-Expressway Campaign, by Neil Macindoe, 8 August 2013;
2. The Glebe Society and the Battle of the Expressways, by Ian Edwards, 13 December 2016 (original 2004).