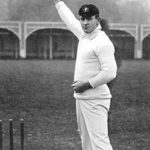 “Tibby” Cotter is regarded a possibly the best fast bowler of the first decade of the 20th century. His pace, and habit of frequently breaking the stumps and occasionally the batsmen, earned him the nickname of “Terror” Cotter in England. He joined the AIF in 1915 and served at Gallpoli. In 1917, he was shot and killed at Beersheba probably by a Turk who had surrendered but not given up his weapon.