Charles Lanham’s steam laundry stretched between Forest St and Lodge St, Forest Lodge. Established by 1903, it remained under family control until 1972 at which time it was an ‘institutional member’ of the Glebe Society. In 1988 the firm went into voluntary liquidation, a process completed three years later.

Charles Lanham was born in London on 28 July 1859, the third son of Sarah and David Lanham. The family landed in Moreton Bay in January 1863 aboard the immigrant ship the Flying Cloud and David Lanham set up business in Brisbane as a tent maker. After moving to Adelaide, Charles married 19-year-old Fanny Emmeline Hall on Boxing Day 1881. Born at Goodwood Park were Walter Herbert (‘Bert’ 1883- 1936), Edward James (1885-9), Henry John (1889-1935), Myrtle Beatrice (1891-1963, married name Glass) and Esther May (1893–1969, married name Munro). Some time in the 1890s they moved to Sydney. The birth of Ernest Charles (died 1980) was registered at Camperdown in 1900. The family practised as Christadelphians, a religious sect believing in selective immortality and forbidding the taking of oaths.

By 1902 Charles had set up as a laundryman, with two addresses in Forest Lodge. Number 3 Forest St was adjacent to James Donohoe of Alexander House. The Lanhams lived in 20 Lodge St, next door to the Hurley family (including the adventurous Frank) at number 22.

In June 1903 Charles Lanham & Son was registered. The ‘Son’ was his eldest child Bert who, after leaving Forest Lodge Public School, became the company’s canvasser visiting hotels, clubs and ships in port to get their washing business. A local competitor for these major users of bed linen, towels and napery was W J Hamilton’s West End Steam Laundry which operated in Blackfriars St from 1895 before moving to Bay St. Residents living near such laundries had to endure the ever-present discomfort of smoke billowing out of their boilers.

First deliveries were by horse and cart, their drivers authorised to collect accounts. Pocketing some of the money was a temptation for Lanham’s carters, despite their being the firm’s top wage earners. In 1907 Sydney Herbert Cohen received a six months’ suspended sentence for embezzlement.

In 1908 Charles Lanham was discharged as a bankrupt after which Bert assumed more responsibility, with his mother acting as forewoman of what became a ‘high class laundry’. In 1917 the partnership W H Lanham & Co. was dissolved, Bert assuming sole ownership. His father moved to Lighthouse Farm near Birriwa where he took up wheat growing and sheep raising. Charles died on 8 March 1933 at the Wentworth Falls home of his younger daughter; his widow, Fanny, suffered a fatal heart attack on 14 May 1934 while having a tooth extracted under local anaesthetic by a Camperdown dentist. Fanny Lanham was buried with her husband in the Independent section of Rookwood Cemetery.

As representative of the Federal Institute of Launderers (with a membership of 250 firms employing 5000 hands) Herbert continued his father’s opposition to increased import duties on machines used in the laundry industry. He made further alterations and additions to the Forest Lodge premises, set up another plant at 131 Mount St North Sydney, signed up more government contracts, and publicised Lanham’s Laundry through its 15-acre model farm near the munitions area at St Mary’s, a pony club prize at the Nepean Gymkhana and Lanham’s Laundry Presents on radio station 2UE. In the 1960s he switched attention to the home delivery dry cleaning and laundry market, operating from outlets at Kings Cross, Double Bay and Artarmon in addition to Forest Lodge.

A paternalistic firm, Lanham’s came under pressure from strengthening trade unionism. In 1926 it was fined for working female employees too much unpaid overtime. In 1944 its 100 members of the Australian Workers’ Union joined other Sydney laundries striking for better wages and conditions. More than 25 000 pieces of unwashed linen piled up at Forest Lodge from the army, hospital ships, railway sleeping cars and RPA Hospital. Attorney General Evatt ordered a return to work but there was another crisis later in the year when washhouse men supported a worker suspended by the foreman. To attract new female press operators, Lanham’s assured them that they would work in clean pleasant conditions listening to music.

Women were traditionally at the bottom of the pay scale. At the top of the hierarchy was the male carter followed by the wash house man, shirt machinist, collar machinist, starcher, sorter and packer, folder, feeder. Lowest paid and most in danger of serious injury was the female beginner.

In 1907 calendar girl Mabel May was feeding an unfenced steam mangle, operated by Charles Lanham and his wife, when the machine started suddenly and her hand was caught between the rollers. After it was surgically amputated, Lanham assured her he would get her a prosthesis and keep her in employment but May sued for £700 damages. The Lanhams argued contributory negligence, a jury inspected the scene and awarded half the amount. In 1933 Nellie Ivy Verley, a 16-year-old living in Talford St Glebe, was awarded £487 compensation for the loss of four fingers caught in a mangle. Twenty years later Dorothy Irwin’s arm was dragged into a machine and fractured. The same year service manager Roberta Stevenson survived an attack when she disturbed burglars on the laundry premises and was beaten unconscious and strangled with her own scarf. 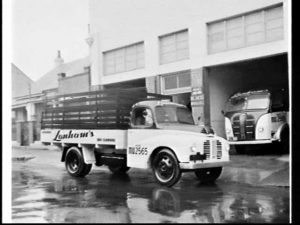 Two bizarre incidents involved company vans. In 1936 a driver set off for Rose Bay with a load of laundry to deliver but suffered a loss of memory and ended up in Broken Hill. Ten years later a thief, unnoticed by nearby employees at Forest Lodge, got into a truck, released the brake and ran it downhill to start the engine. The abandoned vehicle was discovered, but minus its £300 worth of laundry.