What and where is ‘The Hill’? – The Glebe Society

What and where is ‘The Hill’?

‘The Hill’ is a fenced-off area of contaminated Crown land on the northern side of the Tramsheds. The Glebe Society has recommended that the site should become an undisturbed urban nature refuge.

by Max Solling, local historian and Honorary Life Member of the Glebe Society.

Comment about The Hill from ‘I Own the Racecourse!’

Patricia Wrightson, in her 1968 book, I Own the Racecourse!, described The Hill as:

a small corner of vacant land …The ground was covered with rank grass, scraggy bushes, old cardboard cartons and a scattering of tins and bottles. A great old Port Jackson fig hung over a fence behind it … A lane ran off from one corner. In the mouth of this lane and under bushes and deep in the shadows of the fig, green and yellow eyes blinked and widened where the brave, shabby cats were hiding.

The Hill: a valuable biodiversity site

Community engagement in the 1990s: Volunteers working with the Rozelle Bay Community Nursery in the mid- to late 1990s planted native plants, including Casuarina sp, on the south-east edges of The Hill site. Common birds at that time, observed by volunteers, included Superb Fairy-wren, Silvereye and White-plumed Honeyeater, as well as various non-native species. Plantings came to a halt when the light rail stop at Jubilee Park began construction and The Hill was closed off from about 2000.

Current biodiversity values: The Hill is a Crown land site and has been included as one of the sites in the annual Glebe Spring Bird Survey. Sightings have included Brown Goshawk and Australian Brush Turkey. However, without site access, it is impossible to ascertain whether other species might be present, including reptiles, microbats or other native species. 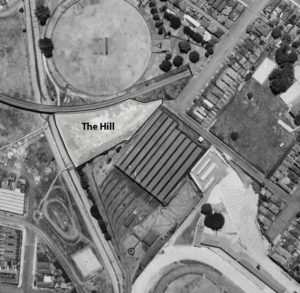 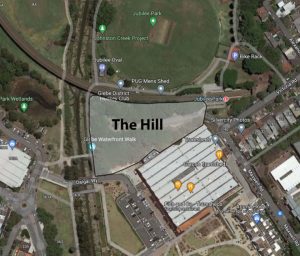 Aerial views of Glebe in which The Hill is outlined to show its approximate boundaries between the Tramsheds and the light-rail railway line. The image on the left is from the 1949 Arial Survey (Sydney Historical Atlas); the image on the right is from Google maps)

The Hill does have some good patches of lantana, which, although not native, is now recognised as providing important habitat for small native birds. It also attracts insects like the Blue Triangle butterflies commonly seen there. Apart from The Hill, most lantana shrubbery has now been removed in the vicinity of Johnstons Creek. There have been no local sightings of birds such as Superb Fairy-Wrens since 2017, although further southwest along the light rail corridor, there are substantial lantana patches and small native birds are still common.

Installing wildlife cameras and acoustic recorders to gather information on current species present and/or threats to wildlife could be an initial step to establishing The Hill as a native wildlife protection area.

Establishing The Hill as a feral-free biodiversity haven: Creating undisturbed habitat – especially small bird habitat – in the Johnstons Creek corridor is very challenging because of the heavy pedestrian traffic, bikes and dogs. Although there are some bush restoration patches, most patches are too fragmented, suffer from vandalism or focus on canopy cover, which limits dense understory.

The Hill represents the best opportunity to create an undisturbed urban nature refuge in the Johnstons Creek corridor, where plants and native wildlife are protected from disturbance. Such a refuge could also create opportunities for future urban nature research projects.

The Glebe Society and its Blue Wren subcommittee are requesting that Council consider:

An online meeting was held on Tuesday, 5 July, to discuss the Society’s proposals. The meeting was chaired by Cailin Martin (Property Strategy Planner). Also attending from the City were Jacqui Brooks (Parks Assets and Services Manager) and James MacNamara (Urban Ecology Coordinator). The Glebe Society was represented by the President and six members of the Blue Wren Subcommittee. Our 2022 Biodiversity lecturer, Professor Dieter Hochuli from the School of Life and Environmental Sciences, Faculty of Science, University of Sydney and leader of its Integrative Ecology Group, was also present.

The following decisions were made at the meeting: