John Locke was co-founder of the NSW Magic Soap Company which erected its corrugated iron buildings on Wentworth Park Rd in the late 1880s and by 1892 was employing 16 hands.  Machinery was powered by steam and all refuse was drained into Blackwattle Bay. Like the Red Cross and Eagle Magic Soap companies, the Glebe firm promised its products would work miracles.

Locke lived at 35 Leichhardt St and 17 Allen St before settling at 69 Boyce St, his home until the early 1920s when he moved to the eastern suburbs. He was Worshipful Master of the Glebe Masonic Lodge, President of the Board of Benevolence and of the Masonic Club, and a Glebe alderman 1911-22 as a representative of the Ratepayers and Property Owners Association. In Council Chambers he dressed formally in a dress coat, bow tie and fob watch on a gold chain.

Born in Melbourne, Locke worked in the soap industry from boyhood. In 1887 he moved to Sydney. With Johan Gerhard Hoogklimmer (a fellow Melbourne Mason and employee of the Victoria Soap and Candle Company) he set up the Glebe works. Here they made ‘Light of Australia’ candles, blacking, blue, washing powder, and ‘Easy Chair Soap’ (in which the housewife could lounge after the product had dealt with all the cleaning: removing grease and stains, polishing pots and electroplate, whitening linen, scrubbing floors and destroying aphids). Creolus soap made other claims. It eradicated caterpillars and, with the outbreak of plague in 1900, was promoted as killing fleas more effectively than carbolic. Soap was sold in four-pound blocks and samples posted to potential customers. Widows of the 1897 Stockton Colliery disaster were offered a year’s supply of sixpenny bars. The soap’s main ingredients were tallow, resin and caustic soda. 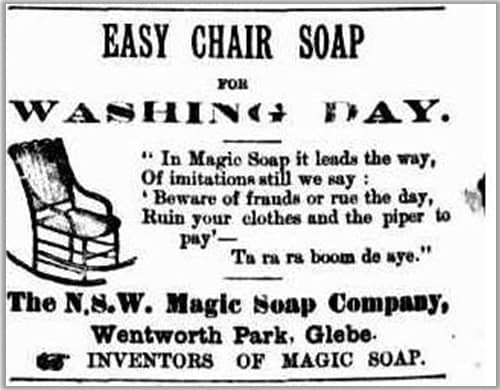 When John McLeod acquired a substantial shareholding, the NSW Magic Soap Co. in 1907 changed its name to McLeod’s Soap Company. Locke remained with the firm. A Protectionist, he was proud that its soap milling plant was made in Australia, of Lithgow iron, and was the first machine of its kind manufactured here.

John Locke died from heart disease at Waverley on 6 October 1930, by which time the soap factory had moved to Waterloo. He was survived by Mary McMillan née Peacock, whom he had married in Paddington in 1889, and their son Keith Morgan Locke, Government Medical Officer at Gloucester. Mary Locke died on 25 June 1942, aged 89 years.

Two incidents brought John Locke and the law together. In 1898 he brought embezzlement charges against William James Armand McLenahan, a canvasser for the Magic Soap Company, who had pocketed some of the money he received from customers. A warrant was issued by the Glebe Bench but McLenahan was not arrested until the following year when he was recognised in Mudgee by a local constable. After serving two years’ hard labour, McLenahan was back in gaol in 1909, 1910 and 1911 under different aliases for similar offences, committed in Lismore, Tamworth, Moree and Newcastle.

Stranger was the story of Locke’s early business associate Johan Gerhard Hoogklimmer who in 1886 staged his own death so his wife could collect the life insurance. His clothes were found on the waterfront at Frankston and he was believed drowned, but he turned up in Holland and was apprehended. His explanation was that he was on the shore when seized with cramp and he floated out to a steamer on a plank of wood. It turned out he had been picked up by a steamer but had reached it by rowing there. Again in financial difficulties and heavily insured, Hoogklimmer in 1902 suicided by gassing.