Florence Jacobs was the original owner of Durham Court, 417 Glebe Point Rd, built on part of the Golden Estate, subdivided in 1908. In 1909 Florence’s mother Sarah Speare bought lots 1 – 4 between Leichhardt St and Cook St. Sidcup on the Cook St corner was then sold to dentist Ormond McDermott. The other lots passed to Florence who in 1911 divorced her first husband and in 1912 married a solicitor, Reginald Jacobs (1876-1953). 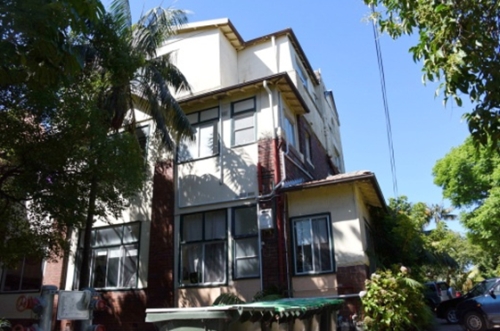 While all this was going on Durham Court was built. The new house was leased to Glebe-born Rowland Thomas Sydney Walker, a produce merchant and grister with city business premises in Sussex St and Goulburn St, who moved from Lynwood 61 Arundel Terrace with his second wife Frances Sarah née Pillans and Rowland’s children by his first marriage; 16-year-old Gladys and 20-year-old clerk Leslie Hollingworth. Rowland’s brother John, also a produce agent, and sister-in-law Pearl shared the house with them in 1915. Two years later the Walkers moved up the road to Bidura and the Jacobs family moved into Durham Court. The adjoining Durham Court Flats, built in 1922, were home to a succession of taxi drivers, actors, engineers, students, travellers, musicians and compositors.

In 1931, after a brief period in Katoomba, Reginald moved with Florence into Werrington, Macleay St Potts Point. Durham Court was leased from 1930 until 1947 when Florence’s son Carleton Ward sold the property to Paul Korboot whose wife and daughter inherited it in December 1962. In January 1963 it was sold to Stamatios and Amelia Anastassiou and Nicholas Ghelis. Its newest owner is Jing-Land Pty Ltd. Since 2007 number 417 has been the subject of a series of Development Applications. The most recent proposes excavation for underground parking, subdivision of the site, and the building of 10 new townhouses by conversion of the original house and demolition of the flats.

Florence Jacobs was one of at least seven daughters and three sons born to Sarah Speare and her husband Peter, an Armidale butcher turned mining speculator turned brickmaker. By 1880 the Speares were living in Sydney. A director of Sunlight Goldmining and probably cashed up to take advantage of the 1890s Depression, Peter Speare in 1891 bought the Goodsell brickmaking plant which operated as the Newtown Steam Brickworks. After Peter’s death on 26 June 1897 his widow secured government contracts for clay pipes and bricks for stormwater channels and similar projects. Some Speare bricks were used in the building of the RPA Hospital. Eldest surviving son Ernest Loftus Speare in 1912 set up Speare’s Brick and Pipe Works at Tempe, a yard which survived until the 1970s when it was bought by Penfolds winemakers. Sarah Speare died on 20 December 1925 at the family home Talmo Croydon.

Florence Speare married Arthur Sawell Ward, a clerk, at Summer Hill in 1904 and Eric Arthur Carleton Ward was born the next year. In 1911 Florence divorced Arthur on grounds of desertion and gained custody of her son who was brought up as his own by Reginald John Jacobs, a partner in a legal practice at Windsor, whom she married in 1912.

Although he continued to work on and off as a solicitor, Reginald became increasingly involved in his Jewish family’s business; Paget Manufacturing, makers of popular household products ‘Shi-noleum’ and ‘Clever Mary’ (‘the Enemy of Grease’). He became the firm’s Secretary with brothers Harold Sydney and Edgar Louis as managing directors. In 1928 they formally adopted the surname ‘Paget’ and while still at Glebe Reginald Paget published a pamphlet The Paget Universal Time Chart. A spectacular fire, fuelled by turpentine and beeswax, in 1924 gutted the Chippendale factory. The firm was de-listed on the stock exchange in 1950. Florence Theodora Paget died on 16 January 1942 and was buried in the Speare family vault in the Anglican section of Rookwood Cemetery with her parents, uncle Harold Speare and two of her sisters Ruby Myrtle and Amelia. Her widower died on 26 December 1953.