The year six students at Forest Lodge have a tradition of leaving a gift for the students who follow them. The plan this year is for a mural featuring Johnstons Creek, but it is being thwarted by City of Sydney’s demand for $735 to lodge a Development Application.

Sydney Water is naturalising the Creek, replacing the concrete banks with sandstone set at different levels along the sides to create varied habitats, establishing a wetland, expanding the salt marsh and increasing the number and diversity of native plants along the sides.

The students’ project is called The Painted River.

Work began during Science Week, when the 36 students gathered by the Creek to study a display of water life put together by water ecologist Ian Wright and to paint what they saw under the guidance of artist Leo Robba. Dr Wright set up a table of samples collected from an undisturbed creek in Pittwater. The display included the stonefly, which he said is ‘supersensitive to changes in water quality.’ While he admits we will never know what Johnstons Creek was like before settlement, he thinks ‘some of these things could be brought back through naturalisation.’ Each of the students also completed a painted canvas.

Mr Reed said the project integrates art and science. ‘We are seeing the creativity coming out. As soon as they put a brush on their canvas it is just flowing, opening these pathways.’

Dr Robba’s students at Western Sydney University will turn the paintings into an artwork that will become the mural.   The mural will then be painted on the side of the toilet blocks between Jubilee Oval and the creek.  The hope is it will encourage passers-by to reflect on the Creek, on the natural environment and its role in their lives.

But the project has hit a brick wall ‒ the $735 needed to lodge a DA to paint the mural on the toilet wall. A Forest Lodge parent, Frier Bentley, is the project coordinator. She said the City of Sydney councillors all voted to support the project. But the CoS bureaucracy has been unbudging: the fee cannot be waived and Ms Bentley is now applying for community grants and looking at fund raising to pay the DA fee. She said the P&C is not in a position to help, with COVID preventing their usual fund raising.

Ms Bentley suggests the CoS ‘should be having a look at their community grants project. (Waiving the DA fee) is cheap money, it is foregone revenue rather than cash outgoing.’ Most of the participants, including Dr Wright and Dr Robba, have volunteered their services, but the person who will actually paint the mural will also need to be paid.

With fourth term, the last for the year 6 students at Forest Lodge, soon to commence, it will be a race to raise the funds and complete the mural before the end of the school year.

In the October 2020 Bulletin we reported on the Painted River Project in which Year 6 kids from Forest Lodge Public School were involved in a community art project based around the naturalisation of Johnstons Creek. The next stage of the project is to create a mural, but they need to raise around $1,500 to get the materials to finish the job. They’ve set up a crowd-funding page on GoFundMe. If you are interested in helping out, it’s very simple. Just go to https://gf.me/u/y5w73c, and follow the instructions. Further details are provided on the GoFundMe page by the artist and organiser, Frier Bentley.

‘The Year 6 students from Forest Lodge Public School want to celebrate their final year at school and also the naturalisation of their local creek, Johnston’s Creek with a wall mural. This will be a legacy from a Painted River excursion they did during Science Week 2020 where artist Dr Leo Robba and water ecologist Dr Ian Wright melded science and art to highlight the role of watercourses in our community. From this excursion, the students created paintings that students from Western Sydney University are now crafting into a design for a wall mural, which, with this funding, will be painted onto a wall in Jubilee Park. We’ve got a lot of supporters but not enough funds to pay the artist and for materials to paint the wall. If we can get it funded, the mural will be along a popular walking track for the whole community to enjoy, not just the students that initiated the artwork. We want to paint the wall in early December before the Year 6 students finish up at Forest Lodge and your support will help make it happen!’ 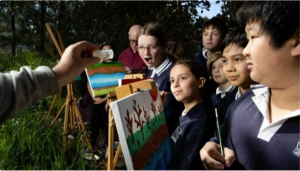