News from the Blue Wren Group – Dec 2010 – The Glebe Society

In the Benledi Meeting Room on Monday 15th November 2010, Oliver Steele, an architect with Steele Associates gave a presentation to Society members about proposed new in-fill terrace houses in Angel St, Newtown. A building application will be lodged with the City of Sydney in 2011 to construct three houses which make use of leading edge technology to reduce energy consumption and the production of carbon dioxide both during and after construction. The external walls will be of pise (rammed earth) and recycled timber will be used for the construction of internal walls. Solar collectors on the roof will be used to produce hot water and electricity, and rain water will be collected for use in the house and watering plants. Each house will also feature a “green roof” covered in soil in which native grasses and vines will be planted – there was hope that it might be possible to have a sufficient depth of soil to plant wren-friendly shrubs but the weight of the soil required is too great. Also each house will be maintained at a constant comfortable temperature by circulating in pipes water heated on roof in winter or cooled in the sub-house soil in summer. Some of the development’s sustainable features could be retro-fitted to houses and unit blocks in Glebe. Following an invitation from Oliver, the Society looks forward to arranging a tour of the completed terraces. 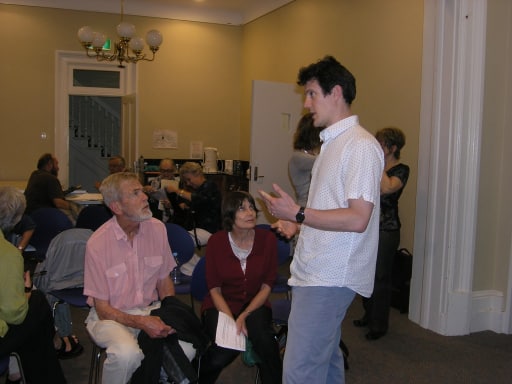 David Watson and Susan Copland talk with the architect, Oliver Steele, at the conclusion of his presentation.
Meeting with Australian Museum Business Services
The Survey of biodiversity is due to be completed by February 2011 and includes an on-line questionnaire to be filled-in by residents, an in-depth study of biodiversity in selected parks (it is proposed that Paddy Gray Reserve in Hereford Street and Orphan School Creek Park near the old Children’s Hospital will be included), and consultation with local bush care groups The aim is to document biodiversity across the City and in particular to record habitats which provide shelter for a small number of a particular species.  Following the Survey a Strategic Action Plan will be written with the completion of an initial proposal available for public comment in May 2011. The Strategy will aim to protect the existing biodiversity as well as recommending activities as to how it may be improved. Topics discussed at our meeting included the need for the appointment of qualified staff to the City of Sydney to implement the recommendations of the Plan and supervise its contractors working in parks; the education of residents in biodiversity issues including the involvement of local schools; the need for owners of companion animals to be aware of the possible damage their pets can cause to biodiversity; and the reintroduction of the City’s garden competition to encourage residents to consider biodiversity when selecting plants for their gardens.
The Blue Wren Group expects to meet again with the City’s consultants once the Urban Ecology Survey & Strategic Action Plan has been released for public comment.
Andrew Wood,  3rd December 2010