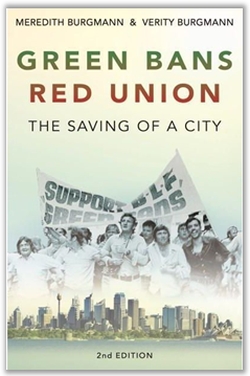 This book is the second edition of Green Bans, Red Union: Environmental Activism and the New South Wales Builders Labourers’ Federation, which was published in 1998 and was an immediate success. It is the story of the NSW branch of the BLF under the leadership of Jack Mundey, Bob Pringle, Joe Owens and others.

During the building boom of the early 1970s, Mundey and his colleagues realised that it was the responsibility of the trade unions not only to improve the working conditions of their members but also to use their industrial muscle to ensure responsible development that took into account the wishes of ordinary people who would be affected by these developments. As Jack Mundey said ‘it’s not much use getting great wages and conditions if the world we build chokes us to death’.

The building boom produced a glut of office and commercial space and did nothing to solve the problem of the housing shortage. When the Battlers for Kelly’s Bush, a group of middle class Hunters Hill housewives, were finally desperate enough to approach the communist-led NSWBLF, they were initially received with some scepticism; but after discussing it among themselves the union decided to help the battlers if they could demonstrate that they had enough support for their cause, which they had no trouble in doing.

This principle – that they would only impose a green ban in response to a request from those directly affected by development plans – was strictly adhered to by the union, much to the displeasure of the Master Builders Association and the state government of the corrupt Premier Sir Robert Askin. As the authors point out, WestConnex has now taken the place of the DMR plans for expressways in the 1970s.

The book contains 31 photographs including one of Mundey being arrested in The Rocks and apparently enjoying his role as a working class martyr.

Glebe resident and member of The Glebe Society, Meredith Burgmann, is probably best known as the president of the Legislative Council when the ALP last governed NSW. She also played a prominent part in the protests against the 1971 Springboks Rugby Union tour of Australia which helped to bring the end of apartheid in South Africa. The book is based on her PhD thesis. Her sister, Verity, is the Adjunct Professor of Politics at Monash University and writer of books on Australian labour history.

The book is available at Gleebooks and all major bookshops in Sydney and worth every cent of the recommended retail price of $39.99