The 40th AGM of The Glebe Society Inc. was held on Sunday 30th August at Benledi.  It was very well attended – in fact the meeting room was filled to capacity. One of the highlights of the meeting was the awarding of Honorary Life Memberships to two members, Liz Simpson-Booker and Eric Sandblom.  Additionally, an award was also made to Bobbie Burke. 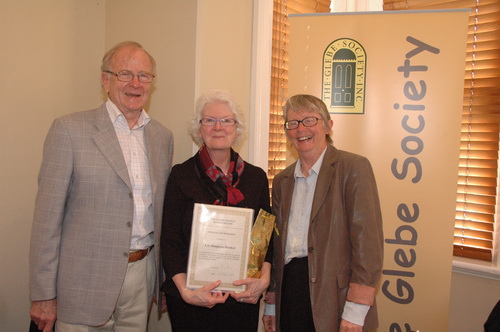 Liz Simpson-Booker (centre) receives her Honorary Life Membership from Lesley Lynch (right), with Bob Armstrong (left) who spoke in favour of the award.  The award was made in recognition of the outstanding work she has done as Secretary of the Society for ten years. 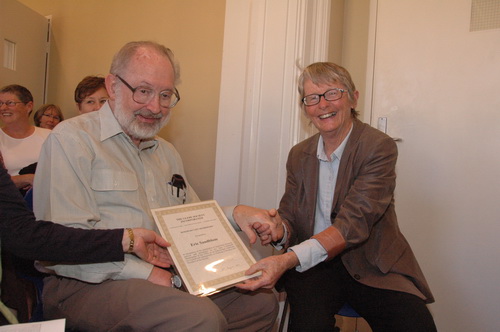 Eric Sandblom receives his Honorary Life Membership from Lesley Lynch.  The award was in recognition of his contribution to improving planning policies and procedures in the then Leichhardt Municipality in the 1970’s as an Independent Alderman on Council, and subsequently as Planning Convenor and President of the Glebe Society.

Lesley Lynch presented Bobbie Burke  with her Glebe Society Commendation, in recognition of the work she has done over many years in connection with the Jubilee fountain, Foley Park, and for the benefits the Society has received from her desktop publishing talents in her design of flyers, invitations, leaflets, etc.

The meeting was then addressed by Ian Carroll OAM, President of the National Trust NSW, who spoke on “Sense of Place and Belonging”.  The text of his talk follows: