Outside is a fountain commemorating the 50th anniversary of Glebe Municipality in 1909. On the low wall just above ground level, there is a memorial to the Aboriginal boxer Dave Sands who was the Empire Middleweight champion and seemed destined for a successful career, but died in a car accident in 1952. He is one of a handful of Australians in the World Boxing Hall of Fame in Los Angeles.

To the right of the Sands Memorial is the stone marking the original western boundary of the City of Sydney, 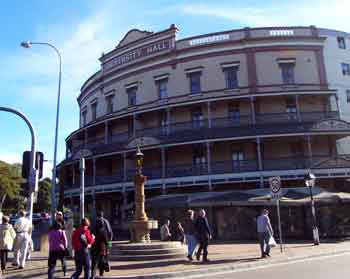