Book launch and books by Glebe residents – The Glebe Society 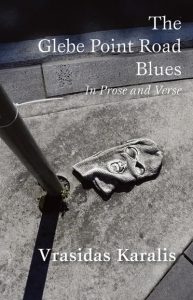 The Glebe Point Road Blues by Vrasidas Karalis is the imaginative recreation of the experience of living on Glebe Point Rd for over 30 years in prose and verse.

Through the encounters of the unidentified writer, the narrative evokes unsuspected episodes and quirky moments from the lives of countless ordinary or sometimes extraordinary people, as fleeting snapshots depicting moments of compassion, love, evil and despair as well as death. Characters, real, imagined and composite, include a respectable professor from Sydney University, a Belgian coffee maker, a British back-packer, a Vietnam veteran, a religious trans-sexual, an Iraqi-Jewish doctor, a failed politician, a child of the stolen generation, a self-indulgent young poet, a ferocious old Nazi, a Chinese dry-cleaner and more. The Road itself takes active part in their existence. 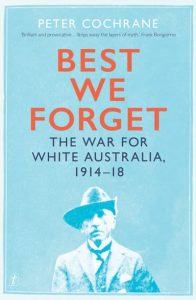 Peter Cochrane, long-time Glebe resident, is perhaps better known as a historian than as a novelist, but recently two of his books have been published, one, a history of race fear in WW1, the other, a frontier novel, The Making of Martin Sparrow.

Cochrane’s history of race fear in WWI is Best We Forget. The War for White Australia, 1914-18 (Text Publishing, Melbourne 2018). The core argument here is that racial obsessions, notably the fear of Japan (Britain’s ally), shaped Australia’s preparation for and commitment to the First World War in ways that have been forgotten by collective memory and banished from official narratives. Why does our collective remembrance contain not the faintest notion that the nation’s war was, in no small part, a war for White Australia? The chapters spell out the racial context, the racial dimension of the war itself, and the concluding chapter discusses the politics of collective memory – how and why these things get forgotten or sidelined. The book was reviewed by Professor Peter Stanley (UNSW Canberra) on the Honest History website in October 2018. Stanley described Best We Forget as: ‘quite simply, the most important book on Australia and the Great War to appear in the course of the war’s centenary.’

Peter Cochrane is a widely published historian and writer based in Sydney, Australia. He is perhaps best known for his book Colonial Ambition: Foundations of Australian Democracy which won the inaugural Prime Minister’s Prize for History and The Age Book of the Year in 2007. His first venture into fiction was the novella Governor Bligh and the Short Man (Penguin 2012). He is a Fellow of the Australian Academy of the Humanities. 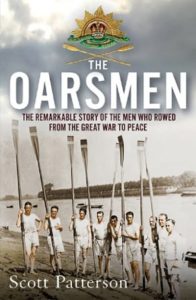 Scott Patterson is a Glebe resident who has just had a book published by Hardie Grant entitled The Oarsmen.

At the end of the First World War, there were 270,000 demobilised Australian soldiers in Europe. Getting them home after the Armistice was a task of epic proportions that would take more than two years. In the meantime, how to keep these disgruntled, damaged men with guns occupied? In a word: sport.

The Oarsmen tells the story of the servicemen who survived the war to row for the coveted King’s Cup at the 1919 Royal Henley Peace Regatta. The leader of the crew, Major Sydney Middleton, came from Pyrmont and Glebe. Competing against crews from the US, New Zealand, France, the UK and Canada, the Australians were a ragtag bunch of oarsmen thrown into an old-fashioned boat and expected to race. Many had seen the worst of the action during the war at Gallipoli and the Western Front, and carried scars both physical and psychological. The baggage they brought to the boat would soon threaten to capsize the whole endeavour.

Combining first-hand accounts with lively prose, this never-before-told story approaches the First World War from peacetime and illuminates history in vivid and compelling detail. Interweaving the soldiers’ personal stories from before, during and after the war, The Oarsmen paints a fascinating picture of how these men, and society, transitioned from an unprecedented war to a new sort of peace.