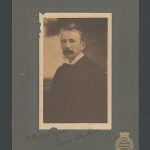 Sir Francis Anderson, philosopher and educationist, was Sydney University’s first Challis professor of logic and mental philosophy. Critical of the pupil-teacher system that prevailed in NSW at the time, and of the rigidity of curriculum and teaching methods, he adopted the slogan “Train the Teacher, Trust the Teacher and Pay the Teacher” and helped develop what became known in NSW as the New Syllabus. He married Maybanke Wolstenholme, née Selfe, in 1899.