Did the creation of the Glebe Municipality in 1859 mark the end of a long, visible, Aboriginal presence in Glebe that had coexisted with early white settlement in the area?  It has often been assumed that Aboriginal people were no longer living in the Glebe area from some date soon after the earliest British settlement.  Yet, there is scattered but important evidence that points to a very different story.

Is it possible that some Church-owned lands around Sydney were chosen for a time by groups of Sydney’s Aboriginal population because they were relatively safe places to live, once they had been excluded from most of their own lands?  Max Solling has written that Bishop Broughton (the Church of England Bishop of Australia) told a House of Commons Select Committee in England in 1836 that, by taking over the land and seriously disrupting their food supply, European settlement had destroyed the tribal life of the Sydney clans.1  Yet there is at least one tree – believed to be a scarred tree – that continues to exist in Glebe which has been dated by Council to approximately the 1850s – suggesting that Aboriginal people may not only have continued to live in the area, but may have been active in conducting ceremonial life there.

Did Glebe’s open paddocks, most probably on unbuilt Church land such as Bishopthorpe Estate (not leased until 1856), for a time provide a relatively safe place for Aboriginals to live?  Given the views of Bishop Broughton, did the Church sanction Aboriginal campsites on their land or merely turn a blind eye whilst the land remained undeveloped and unfenced?

In October 1810 William Cowper, Resident Chaplain, had placed two notices in The Sydney Gazette addressed to the ‘Inhabitants and Herdsmen of Sydney’, warning them not to cut any wood nor drive cattle to graze on the Glebe of St Phillips estate, on the north side of Parramatta Rd, between Blackwattle Swamp and Grose Bridge (i.e. Orphan School Creek). Cowper’s clear message was that this land was now reserved for the use of the Church and anybody else using it was trespassing.2

All of the land reserved for the Church was in the area known by the whites as the Kangaroo Grounds.3  The Aboriginal names for the lands on and around which ‘The Glebe’ was then situated were Cadi and Wanne.  Cadi was described as extending from South Head to Long Cove where Wanne commenced, extending as far as Parramatta or Rouse Hill.4  The names given to the people were taken from the names of their country (Cadigal from Cadi, Wangal from Wanne).5

After 1788, many Aboriginal people were killed and many died from a range of infectious diseases, including smallpox.  However, this didn’t mean that Aboriginal people had disappeared from Sydney, including Glebe, by 1810.  As long as there had been agreement, there had always been Aboriginal movement across ‘Country’ with different groups intermingling, marrying and having families.

Very few Cadigal people are said to have survived smallpox, and more men survived than women, but there were still some Cadigal and certainly Wangal – together with other Aboriginal groups and their descendants – living in Sydney who had survived.  The campsites in Glebe would now have consisted of Aboriginal people from a variety of areas. They simply tended to become more ‘invisible’.  Grace Karskens in The Colony has written:

Nonetheless, they were there, their presence glimpsed in peripheral vision, mentioned in newspaper snippets, travellers’ tales, seen in names on old maps, faces in photographs, in the reminiscences of old people, in local and family lore.6

From 1788 to 1859, the Aboriginal people living in camps in Glebe may have been able to continue to access sufficient food and water supplies from Glebe’s freshwater creeks, from fishing in the bays and harbour using shells for hooks – and from the native animals, birds and plants living and growing in the area.  Adequate timber for a variety of uses, including women’s canoes (nowies) for fishing, coolamons and shields, would also have been available. 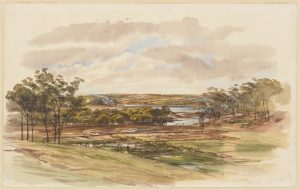 If supplies were scarce, it’s likely that some incursions were made into fenced-off areas – by Aboriginal people, as well as escaped convicts.  An early white colonist, Joshua Palmer, who had a 25-30 acre farm adjoining the Glebe lands at Perroquet Hill opposite Grose Farm, regularly placed cautions in The Sydney Gazette in an attempt to stop people ‘cutting timber, making inroads to the injury of the fence, turning stock, or in any other manner trespassing’ on his farm.7 (The name Perroquet Hill indicates that birds were in abundance there.)

Much more has been written about Glebe’s early vegetation and fauna, than has been written about its early Aboriginal residents.  Given Glebe’s proximity (within walking distance) to the Sydney Markets, there may have been opportunities for some of Glebe’s Aboriginal residents to collect various forms of local native produce for on-selling at the markets.

Mary Salmon, writing about the history of Glebe/Forest Lodge in 1904 reflected:

All around was beautiful bush land, where, on holidays, parties would come from Sydney, to gather native currants, geebungs, and a peculiarly rare, native delicacy called “Hellfire” berries … Forest Lodge, which was for many years a thick eucalyptus wood, alternating with low, scrub land, where wild duck were plentiful.8

There are many early references to a plentiful supply of native currants (sour currant bush – Leptomeria acida, Leptomeria acerba) growing around Glebe and Annandale.  The berries from this scrub-like plant had an agreeable acid taste, and the plant was used by early colonists to make jams and jellies, to make brooms and even as a treatment by doctors for scurvy. Some variants of Leptomeria acida, due to extra acidity appear to have been called ‘hellfire berries’.9

In 1881, The Town and Country Journal article on ‘The Native Currant’ reported that ‘the native blacks used to collect large quantities, which they disposed of to the settlers at very moderate rates’.10

The native ‘sweet sarsaparilla’ Smilax glyciphylla, which was used as a general remedy by the colonists as a substitute for tea, may also have grown around Glebe and been collected by Aboriginal people. Known as ‘sweet tea’ it had a taste resembling liquorice and in 1851 was still said to be ‘abundant in the neighbourhood of the metropolis’.12

Other native produce which local Aboriginal people may have collected around Glebe for on-selling at the markets – or directly to some of the settlers and visitors to Sydney – include fish, shellfish and other edible native plants, as well as native flowers used for Christmas decorations – Christmas bush (as a substitute for English holly) and Christmas bells. Karskens considers that ‘Transactions and agreements were made on a personal, reciprocal basis. Visitors often wanted artefacts and botanical and geological specimens, and Aboriginal people obliged – for a price.’ 13

In 1841, Glebe’s white population was counted as 203. As estates were sold off and subdivided, as more houses were built and with the arrival of new industries, the white population grew rapidly between 1846 and 1851, from 1,055 to 1,575. 14  This may have increased the pressure on safe places for Aboriginal people to live. Yet they had certainly been there far into the 19th century.

In 1880, a journalist writing for the Australian Town and Country Journal, wrote:

SINCE the year 1859, when Glebe was declared to be an independent municipality, to be governed by a council chosen from its residents, a complete change has occurred in its appearance and importance. At that time the houses were few and far between, and the population not very numerous. The greater portion of the land was covered by scrub and wattle trees, occupied by numerous camps of blacks, the roads were wretchedly formed, and the lower part of the township was occupied by an impassable swamp.15

The wording is interesting, not least because it refers to ‘numerous’ campsites of Aboriginal people being present in Glebe up to 1859.

This early ongoing presence of Aboriginal people living in Glebe in the 19th century is further reinforced by the memories of James Robinson, who was born in 1845. On James’ death in 1929, the Maitland Weekly Mercury reported:

Mr, Robinson, whose parents came from Lancashire, was born at the corner of Glebe Road [Glebe Point Rd] and Francis Street Glebe. He had a keen recollection of early Sydney and was present at the turning of the first sod of the first railway in Australia – the line from Sydney to Parramatta. Mr Robinson also remembered the blacks camping near Glebe Road, that portion of the district then consisting of open paddocks.16

So, it was as the lands and waters of Glebe became increasingly privatised, developed and populated by white settlers, with new buildings erected on the remaining Church lands, that most of the Aboriginal population may have been displaced from Glebe’s fast-disappearing open paddocks, having lost access to resources and livelihood.  Some of Glebe’s Aboriginal population may then have moved to other Aboriginal campsites around the harbour, further up the Parramatta River, or perhaps to La Perouse.17

Although time was when The Glebe seemed a sort of enchanted forest with its lofty gums looking as gloomy as the black feathers on a hearse, the wild duck and profusely growing geebungs and hellfire berries were not left for long to enjoy their immunity once the Glebe Municipality was proclaimed on 1 August 1859.18

Yet in other areas of Sydney, this tradition of Aboriginals fishing and gathering native produce, plants and wildflowers to sell, seems to have continued well into the 20th century.  In Rivers and Resilience, for example, Heather Goodall and Allison Cadzow recount the story of Aboriginal people living at Salt Pan Creek on Sydney’s Georges River.  In the 1920s, one Aboriginal family was able to make a cash income from wildflowers: ‘They could use their knowledge about where to find the best flowers, and then gather and sell them door to door or at the local and city markets’.19

So, it may be that the assumptions about the early disappearance of Glebe’s Aboriginal community need revisiting. We may find, after all, that we have just failed to notice the traces of their continuing, active presence.

It is interesting that in 2020 there was still an undetermined 2009 Aboriginal Land Claim by the Metropolitan Local Aboriginal Land Council, on part of Wentworth Park, south of the greyhound track. 20